Haris Rauf talks about his memorable encounter with MS Dhoni 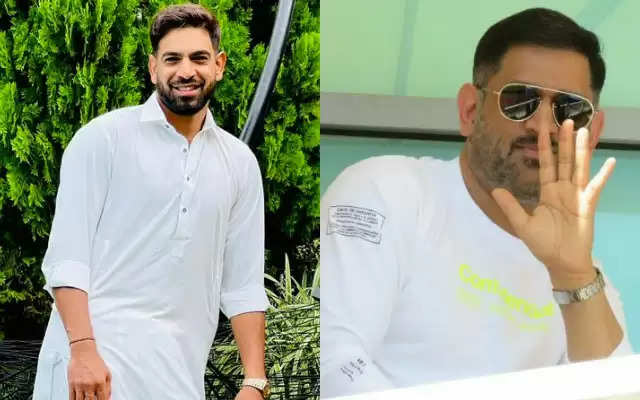 India and Pakistan enjoy a heated rivalry on the field of play in any sport they play. Last year the beat India for the first time in a world cup. India lost the game to Pakistan by ten wickets during the T20 world cup game in Dubai. One of the players who impressed the world with his bowling was Haris Rauf. The 29 year old blew everyone with his pace and ability to bowl at over 145 KPH on a consistent basis. Rauf recently spoke about meeting former India skipper MS Dhoni.

MS Dhoni was appointed as the mentor of the Indian which played the T20 world cup last year. India were grouped with Pakistan, Afghanistan, Scotland, Namibia and New Zealand. India lost the first to two matches to Pak and NZ, and despite winning the final 3 games they did not qualify for the Semis. That’s when Pakistan speedster Haris Rauf happened to meet former India skipper MS Dhoni.

MS Dhoni has always had fans across India and the world, he also enjoys huge following in Pakistan. It was in Pakistan, that he made name with a brilliant century during the test at Faisalabad in 2006. In 2005, MSD came to the fore with a breezy 148 during ODI versus Pakistan. Haris Rauf while speaking to the YouTube Channel of the Grade Cricketer said "met MS Dhoni after the game against India at the T20 World Cup last year. I asked him to give me one of his shirts. But I told him that I wanted a CSK jersey and not the Team India one. He told me that he will surely send me that. I finally received it when I was in Australia”

Rauf speaks about his interaction with other Indian players –

Rauf also revealed how he bowled to the Indian batters as a net bowler and how he managed to impress them with his pace. Rauf revealed that he was bowling alongside Hardik Pandya who told him he could one day play for Pakistan. Rauf said “I bowled to the likes of Cheteshwar Pujara and Virat Kohli in the nets. Hardik Pandya was bowling alongside me, and he told me that I was doing good and that he’s sure that I’d soon be playing for the Pakistan team”

Haris Rauf made his T20 debut in early 2020 and followed it up with his ODI debut on October the same year. Till now he has played 13 ODI games for Pakistan and picked 23 wickets. Rauf has also played 35 games and picked 42 wickets.