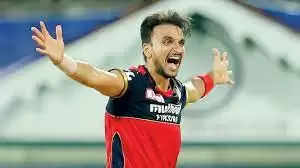 Indian Premier League has changed the fortune of many players and Harshal Patel is one among them. Harshal Patel who struggled to be even picked for many years since making his IPL debut in 2012, struck gold when he picked 32 wicket last year during IPL 2021. He soon made his India debut before being picked by RCB for INR 10 Crores.

Harshal Patel who is playing for RCB was recently part of the Breakfast with champions show and told a story about he struggled and had to work in Pakistani store while in the US. Speaking to Gaurav Kapur he said “I used to work at this Pakistani guy's perfume store in Elizabeth, New Jersey. I couldn't speak a word of English because I had studied in Gujarati medium throughout. That was my first encounter with the language and also with the language with so much slang because that entire area was predominantly Latino and African American. Then I picked up their kind of English. Gangster English. They used to come and buy $100 perfume bottles on Fridays. On Monday they used to come back and used to say, ‘hey man I just sprayed it a couple of times. I want to return it man. I have no food on the table'. That was a regular occurrence. It was a great experience for me because I learned what those blue collar jobs really are. My aunt and uncle used to go to their offices, and they would drop me on the way. So at 7 am I would be dropped and the store would open at 9 am. Two hours I used to sit at the Elizabeth railway station. Do my work till 7.30, 8. So 12-13 hours a day and I used to get paid $35 a day”

Eventually it all worked out for Harshal Patel as he made his fame and fortune in the cash rich IPL and became a house hold name. his 32 wicket last year earned him the purple cap and he became the best bowler in the tournament. Which led him to a Indian team call up and soon he was re-bought by RCB for whopping amount over 10 Crores during IPL 2022.