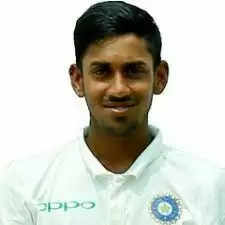 Cricket for years has been under the strict supervision of the eagle eyes of the Anti-Corruption Unit. The game has been long facing with its name and nature being tarnished by the dark under belly which can trap young players. Cricket has seen various dark deeds of the past in the match-fixing or spot -fixing incidents.

Indian cricket and BCCI along with the law enforcement agencies take a strict cognizance of any wrongful approach towards any player. This has been the norm, whether it is international cricket, IPL or domestic cricket or even the locally contested cricket games.

Young Delhi Cricketer by the name Vaibhav Kandpal has recently made some startling revelations. The youngster has been blackmailed after he was blackmailed by a few people. The youngster was in Kolkata when this incident happened during the recently held Syed Mushtaq Ali 2022 Tournament.

Vaibhav Kandpal was with the Delhi which was playing the recent Syed Mushtaq Ali tournament. According to reports from India Today, the youngster was honey trapped and blackmailed. The Delhi team was staying in a hotel at Salt Lake and the matter has been pursued by the Baguiati police.

According to the statement made to the media “Vaibhav was called to come to a bus stop in Baguiati by 3 people and was threatened. The accused robbed the Delhi cricketer of INR 60,000 and also took away his mobile phone and jewellery”.

Vaibhav played one match for Delhi –

Vaibhav Kandpal played one game during the 2022 Syed Mushtaq Ali tournament and scored 5 runs against Tripura. The youngster who is 22 years old is a right handed batter and off break bowler. He has so far played 2 List A games and the sole T20 match for Delhi against Tripura.

The report further said “the accused deceived the cricketer by saying that he could spend time with one of the women following which he was taken to different places in the city. The accused then extorted lakhs of rupees by threatening to make offensive videos of his private moments”

The accused have since been arrested by the local law enforcement authorities. The 2022 T20 Syed Mushtaq Ali tournament was won by Mumbai for the 1st time by beating Himachal Pradesh in the final of the tournament.