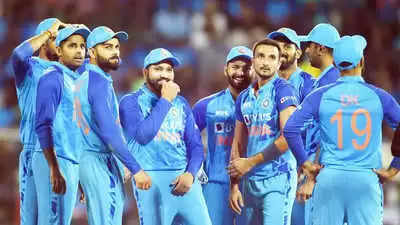 In less than 30 hours the first semi final of the 2022 T20 World Cup will be getting underway. The 1st match will see Pakistan and New Zealand take on each other at the Sydney Cricket Ground. The next day it will be the turn of the Indian team to take onto the field. The men in blue will be playing England at the Adelaide Oval on Thursday in the 2nd Semi Finals.

India played 5 games during the Super 4 stage and happened to win 4 of the matches and lost 1. India began with wins over Pakistan and Netherlands before losing to South Africa. India then beat Bangladesh by 5 runs with the Duckworth and Lewis method before finishing the super 12 stage with a win over Zimbabwe by 71 runs to go top of the table for Group 2.

The medical team came out and attended to Rohit Sharma and the Indian captain made his way back to the nets. What will come as a concern to the Indian fans is that after facing 1 ball in the nets the Indian captain had grimace on his face and stopped the nets session and called it quits.

Apart from one half century against Netherlands, the 2022 T20 World Cup isn’t a happy one to remember for Rohit Sharma. He failed to score against Pakistan falling for a single digit score.

The bad run of form then extended against South Africa, Bangladesh and Zimbabwe where was caught while going for his pull shot. Former Indian skipper Sunil Gavaskar has thrown his weight behind Rohit Sharma and said he will come good with a huge score during the knock out games.