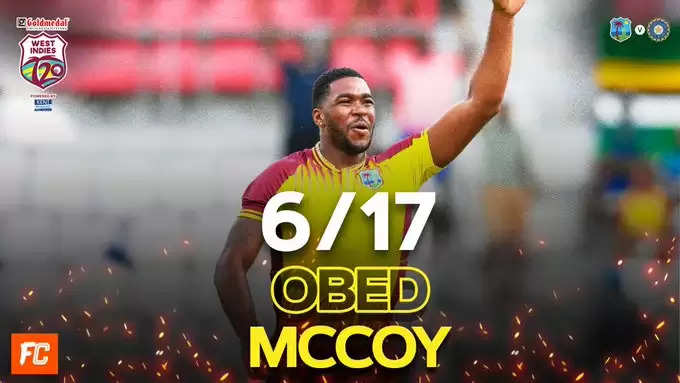 In the second match at  St. Kitts, the Nicholas Pooran-led side managed to restrict India to a low score and a good finish from the likes of Devon Thomas ensured that their first win  on the line of a nail-biting thriller.

But Twitter reacted differently to the OBed McCoy spell in the T20 match. He  got a wicket of Rohit Sharma on the first ball of the game. Then he took wickets of Suryakumar Yadav (11) and Shreyas Iyer(10) perished early after hitting a six each while Rishabh Pant wasn’t wasting any time getting onto the act with two sixes in his 12-ball 24.

Obed McCoy bowled the best spell of his career in T20I returning with figures of 4-1-17-6. He ripped apart the Indian batting unit and 31 by Hardik Pandya was the highest score for the visitors.

Ind fans going to bed at 2.30 am after watching team lose in last over #WIvIND pic.twitter.com/phDoR9sixa

Brandon King also gave a sizzling start to the run chase and was in fine touch from the start of the innings and scored 68 runs from 52 balls but wickets kept falling from the other end. Devon Thomas played a cameo of unbeaten 31 runs from 19 balls, in the end West Indies won the contest that went down the wire.

In the last over, West Indies were required 10 runs to win. Captain Rohit Sharma had the option to either go with Avesh Khan or back Bhuvneshwar Kumar in for the last over. Rohit decided to give the last over to Avesh but he was unable to pull off the victory conceding 10 runs from three balls including a no-ball in the crunch situation.