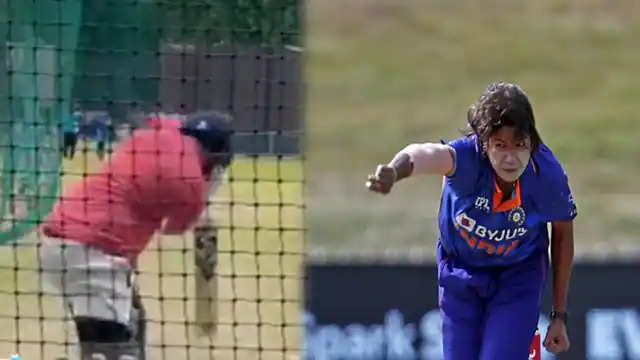 The Indian Stylish batsman KL Rahul was seen facing India's veteran pacer Jhulan Goswami in the nets of National Cricket Academy. The video has surfaced across the Internet,  making people marvel about this deadly combination.

It’s very rare when we see women cricketers interact with the male cricketers.  But the country is amazed to see this and witness the skills of both Indian cricketers.

In the video from the nets, the Indian vice captain was seen facing a few deliveries by the all-time great player Jhulan Goswami. In the clip, first delivery was the full length delivery outside off in which he manages to drive elegantly towards covers. Then she proceeds to bowl a length delivery, enabling the Indian vice-captain to rock up on his back foot and fiercely cut the ball away square of the wicket.

KL Rahul is recovering from a surgery for a sports hernia that has kept him out of the game since the end of IPL 2022.  The Indian batsmen was announced as India's captain to lead the Men in Blue against South Africa, but he wasn’t able to participate in the series due to groin injury. He was also named for the England tour but had to remain out due to the surgery.

Till now, he has missed  12 T20Is, 3 ODIs and a Test series over the last two months but now he has undergone a successful surgery in Spain and is all set to return in the upcoming tour of the West Indies. The series will start from 22 July, 2022.

Goswami also has not seen in the Indian jersey since March. She was last featured in a dismal Women’s World Cup campaign. The star player has announced her retirement from T20I four years ago, but shows incredible performance in the longer formats.

It was a joy for the fans to watch two big players of the cricket community against each other.