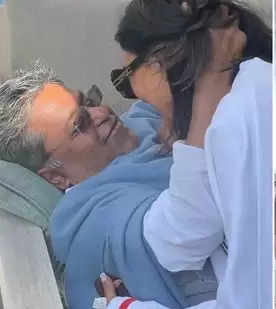 Indian cricket is always cannon fodder for a lot of spicy news and everything that happens with Indian cricket becomes news. Be it for its performance on the field or off the field, the men in blue and the people behind the scenes hog the headlines. One such man is Lalit Modi, the founding father of the Indian Premier League. Lalit Modi has been out of the country for a long time and recently has come in the news for a rather surprising alliance he seems to have sprung up.

Lalit Modi is away in London for a long time and enjoying the summer that England has to offer. Recently he took to twitter and wrote “Just back in London after a whirling global tour #maldives # sardinia with the families - not to mention my #betterhalf @sushmitasen47 - a new beginning a new life finally. Over the moon”. He posted a series of pictures of himself and Sushmita Sen a former beauty pagent winner and Bollywood actress. This set the tongues wagging and set the social media on fire.

Are the duo married?

the interesting aspect of the tweet was the word “Better Half” and this got a lot of people curious. The fans and the social media users wondered if Lalit Modi is married to the Bengali beauty. Lalit Modi posted a 2nd tweet and said “just for clarity not married – just dating each other. That too will happen some day”.

Lalit Modi is the man who introduced franchise cricket to the world when he got the world to see the marvel of the Indian Premier League. Lalit Modi has been out of the country for a long time after his battles with the BCCI saw cases pile up against him. He is being credited for making India the richest cricket body in the world.