Legends League Cricket 2022: Watch! Mohammad Kaif turns his arm over and get a wicket 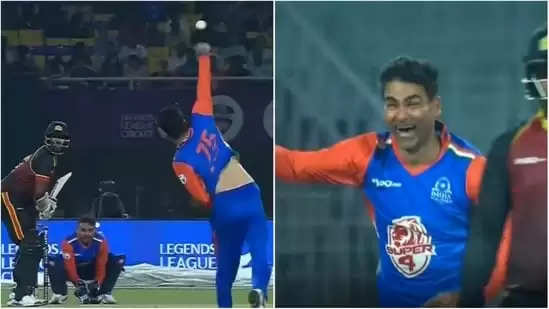 International cricket stars from the yesteryears have come to India to take part in the Legends League Cricket 2022 season. The 4 team tournament kicks off on 17th September with the first game of the tournament played at Eden Gardens in Kolkata. This is a rare chance for many to see some of the biggest names of world cricket in action one more time. Legends League cricket was first played in 2021, and this year the tournament begins 17th September and the finals on 5th October.

The match on Friday the 16th September saw India Maharajas take on World Giants. The match was to celebrate the 75th year of Independence. Initially, it was reported that for India skipper and current BCCI chief, Sourav Ganguly was going to play the game. The 50 year old though pulled out and was seen in the stands.

Ashok Dinda, the former India and Bengal pacer walked off the field in the 16th over after bowling 4 balls of his 3rd over. That’s when Sehwag, the Indian Maharajas captain threw the ball to Mohammad Kaif. Thisara Perera, hit the first ball by Kaif for a six. The next ball, Kaif had his revenge. The 41 year old floated one outside off stump, Perera had a wild swing but was caught by Awana for 23.

Put into bat, Kevin O Brien and Hamilton Masakadaza opened the batting for World Giants. The pair went after the Indian new ball bowlers, Irfan Pathan and Sreesanth. The duo raced to 50 in quick time, before Pankaj Singh had the key wicket of Masakadza. The former Zimbabwe captain as caught by Tanmay Srivastava for 18.

Kevin O Brien scored 52 off 31 before he was caught by Harbhajan off Joginder Sharma. The off spinner then struck with the ball when he had Kallis out bowled for 12. Ramdin and Perera then added 42 before the Sri Lankan was dismissed.

Ramdin stays not out as Pankaj Singh creates history –

Former West Indies keeper, Dinesh Ramdin stayed not out on 42 from mere 29 balls with 5 fours and a six. The last over was bowled by Pankaj Singh, and the former India pacer picked 3 wickets and bowled a maiden over. Not only this, Singh also picked a 5-wicket haul. His last over victims were, Kaluwitharana, Bresnan and Vettori.

Chasing 171, captain Sehwag began the chase with a four, but Fidel Edwards had him caught behind for 4. Parthiv Patel played a breezy knock of 18 off 13 balls with 2 fours and a six. Patel was dismissed by Bresnan, the former English all rounder also got the wicket of Kaif for 11.

Srivastava and Yusuf Pathan come up with a crucial stand –

Batting at 3, former UP opener Tanmay Srivastava was joined by former all-rounder Yusuf Pathan. The pair added 103 runs for the 4th wicket in just over 11 overs to take the game away from World Giants. Srivastava scored 54 off 39 balls with 8 fours and a six.

Yusuf and Irfan Pathan, were recently seen playing for India legends in the Road Safety World Series. On Friday, Yusuf Pathan came back to Kolkata and gave his KKR fans much to cheer. Yusuf was not out on 50 off 35 balls with 5 fours and 2 sixes. Irfan joined his brother to hit the winning runs as he scored 20 off 9 balls with 3 massive sixes.