Mohammed Siraj the red ball specialist who is turning heads with the white ball - SKY247.com 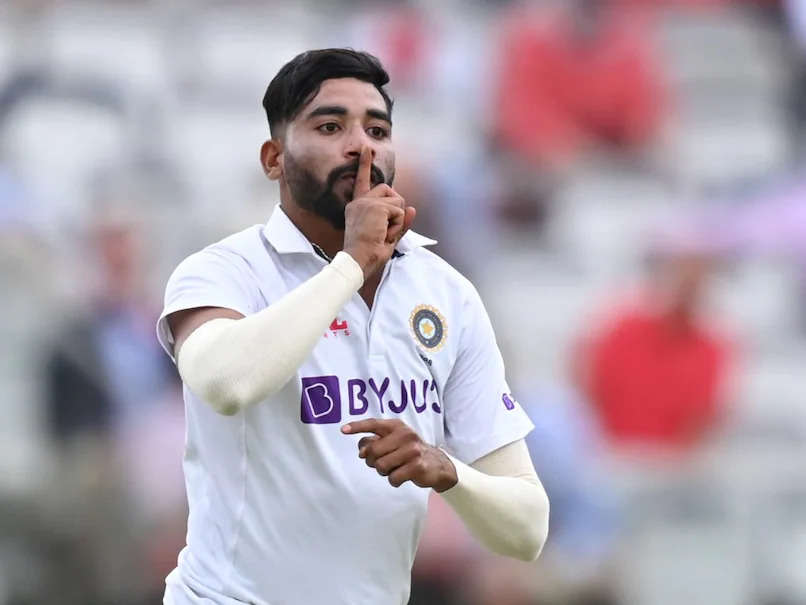 Indian pace bowling stocks have risen over the last few years, and currently we are seeing the best results being yielded. The current crop is seeing Jasprit Bumrah and Mohammad Shami lead the team in the red ball format. Bumrah and Shami along with Bhuvneshwar Kumar have also done well in the white ball format. While Umesh Yadav does his bit when given a call up, the likes of Umran Malik, Arshdeep, or the uncapped duo of Kamlesh Nagarkotti and Shivam Mavi are all talked about as serious pace bowlers. One man who has been the cornerstone of Indian bowling for the last few years has been 28 year old Hyderabadi, Mohammed Siraj.

Wayward start with the white ball -

Mohammad Siraj made his debut for India in 2017 when he was 23 years old against the visiting New Zealand team. His debut game at Rajkot saw him concede 53 runs for the wicket of Kane Williamson in a game which saw Colin Munro rack up yet another T20 century. He next played a month later against Sri Lanka and got one wicket for 45 runs. Siraj who had bowled at 150 KPH during the IPL 2017 season was being carted around. Siraj played one more game early 2018 against Bangladesh giving away 50 runs for a sole wicket in the Nidahas trophy win. That unfortunately was the last time Indian fans saw Siraj with the ball in hand for India.

Making a mark in the red ball game -

Siraj did make a brief comeback when he made his ODI debut during the Australian tour of 2019 when he was smacked for 76 runs from his 10 overs. Not even 25,Siraj was staring at an early exit from the Indian team. The change came in latter half of 2020, and early part of 2021, when he was picked for the test team of Australia. India had lost Shami post the first test at Adelaide. By the end of MCG and SCG tests, they had lost Umesh Yadav and Jasprit Bumrah. Siraj became the leader of the attack where he had a one test old Shardul Thakur and yet another newbie, mind you half fit rookie in Navdeep Saini and a fresh rookie in T.Natarajan. Siraj picked 5 wickets in that famous and fateful Gabba game to help India win the series. Siraj also continued his good form with the ball when India toured England in 2021 when he picked 8 wickets in the famous Lord's test win.

White ball call ups and making up for lost time -

Based on his performances with the white ball, Mohammed Siraj has found favor amongst the Indian selectors for the shorter formats as well. Siraj has learnt to bowl with consistent seam and stays away from the cross seam balls. Since his return to White ball formats, his economony rate has been better too. In his last T20 game for India earlier this year, Siraj gave away just 22 runs for a single wicket from his 4 overs. The economy of 5.5 runs per over was the lowest ever in Siraj's career so far. In 7 One Day Internationals, Siraj has picked 11 wickets with an economy of 4.7 which is on par with some of the best bowlers in the world today if not better.

The evolution of Siraj takes place at RCB -

Virat Kohli is a known admirer of the art of fast bowling, and it was under his leadership that India has become a fast bowling hub. IPL 2022 was a bad one for Siraj no doubt, but it is his numbers during the previous 3 seasons that need a close look at . After leaving SRH and making a short jump to RCB, Siraj has become a better white ball bowler. The batting friendly conditions of Bangalore as well as the Small boundaries have made him a better and more thinking cricketer. Siraj also evolved when IPL was played in UAE as the tracks can be variable across the venues (Dubai, Abu Dhabi and Sharjah). IPL 2019 saw Siraj pick 7 wickets with one maiden over. It was IPL 2020 which got him more fame when he bowled 27.1 overs picking 11 wickets with 2 maiden overs. The following year he again picked 11 wickets with one maiden over as his economy dipped to 6.79 runs per over. Siraj as a bowler was difficult to play in the early stages of a T20 match with the New ball.

Mohammad Siraj has learnt not only to swing the ball but also swing it with pace and more importantly he varies his pace much better. In the recent ODI series against West Indies he was bowling between 135-145 in his early spell while in the latter half he was constantly touching 140's range without breaking a sweat. He now knows that he cannot keep bowling the cross seam deliviers as it rarely gets him the wicket. One another aspect of Siraj is that he is an under rated swing bowler and he can rankle the best of batters with his ability to swing the ball with good speed.

Cricket Cult's take on can Siraj make it to the Indian T20 team?

Mohammad Siraj must have given the selectors some confidence with the way he bowled during the West Indies ODIs. The fans will have a close eye on the players who get picked for the 2022 Asia Cup. The selectors have given indications that the players who get picked for the Asia Cup will be the one's going to Australia for the T20 world cup. Mohammad Siraj wasnt picked for the Indian team which is playing the 5 match T20 series. He has also been rested for the Zimbabwe tour post the Caribbean Sojourn. The indications are pretty mich that Siraj may not make it to the World Cup, but there is also recent performances to look at and one cannot ignore what Siraj has done with the white ball. To sum up our thoughts, we feel while Siraj may have done a lot to deserve a call up, the Indian selectors may not be swayed by their stand and Siraj perhaps may have to wait a while longer to play an ICC event

SKY247.com is bringing the excitement of the Indian international cricket season to the fans fingertips after the successful TATA IPL 2022 season. SKY247.com is one of the fastest growing sports brands in the world which has found a lot of following amongst cricket fans worldwide. If  you want to show your knowledge and be part of the fast paced action of anything to do with Indian cricket then head to SKY247.com and make your predictions. The Brand has been associated with the non stop action frenzy T10 format with the Abu Dhabi T-10 tourney, as well their association with the PSL in 2021 and the T20 series between Pakistan and South Africa and TATA IPL 2022 in recent times. To make your predictions during the current international cricket season head to SKY247.com.