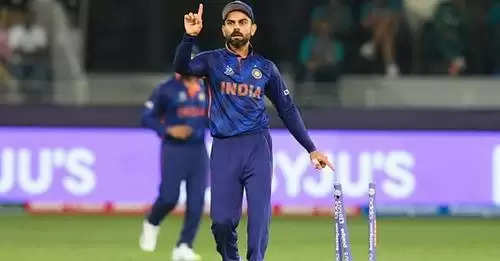 The uproar has created in the Indian Cricket Community, and there were rumours that it was Kohli vs Ganguly has created saga it was escalated.

In January, Kohli announced that he want to quit in India's Test captain as well officially bringing to end the captaincy era.

And there was also coincidence or a bad form, that Kohli is not able to perform and there are questions about his performance as well. The former Indian captain has struggled to get runs on board and repeatedly getting trapped at the outside off-stump ball.

With Kohli appearing out of it mentally, fans began to wonder whether the BCCI messed up with him so much that it had an adverse impact on his batting, but board treasurer Arun Dhumal has dismissed any such rumours. With Kohli being given constant breaks, many argue if it is the right call, and whether he still fits in India's World Cup plans. To that, Dhumal replied saying that Kohli's selection is entirely up to the selectors.

"See… as far as Virat is concerned, he is not a simple player. He is a great and his contribution to Indian cricket is unparalleled. It is outstanding. So, such conversations (board is trying to sideline Kohli) keep taking place in the media and it does not affect us. We want that he returns to form soon, and as far as team selection is concerned, we leave it to selectors. It is their call as to how they want to go about it," Dhumal told veteran sports journalist Vimal Kumar on his YouTube channel.

As far as the issue of captaincy is concerned, it was his call. He decided that mujhe ab nahi karni hai captaincy (that I don’t want to captain). It is possible that someone feels it’s best to do it after the World Cup but that is their point of view. But he wanted to quit, and it was purely his decision. And we respected it. See he has contributed so much to Indian cricket that everyone in the cricket board respects him. We would like to see Virat in action on the ground," added Dhumal.