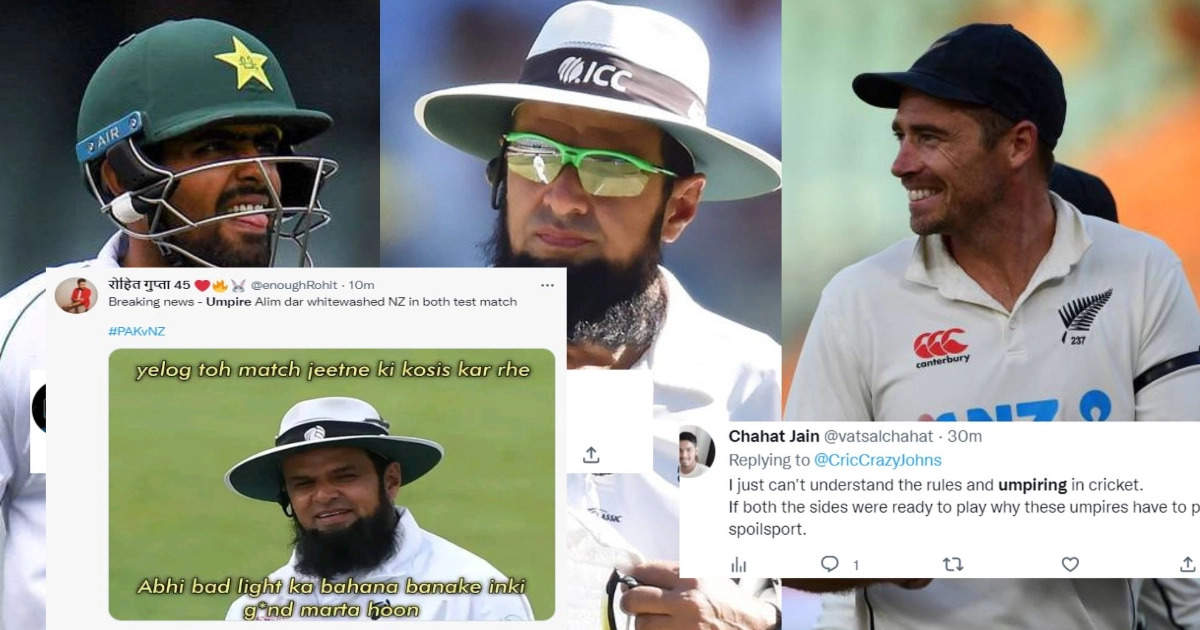 Pakistan cricket team began the new year, just the way they ended the last year. The 2nd test match against New Zealand at Karachi also ended in a draw. The first test match too ended in a stalemate at the same venue towards the end of the year.

Pakistan are yet to win a home test match after playing 8 tests at home. Australia and England played 3 tests each last year. The Australians won the series 1-0, while England whitewashed the home team by 3-0 margin.

Pakistan’s 0-0 series result against New Zealand put an end to their back to back series losses. The PCB has been called out for the kind of pitches being made during the two match series.

Umpire Aleem Dar is in the eye of the storm as he has been criticised by the fans. The reason for the criticism is his decision to put an end to the game with Pakistan needing 15 runs and New Zealand one wicket. Aleem Dar decided to speak to his fellow umpire Alex Wharf and call the match a draw. This despite the spinner bowling from both ends for a considerable period of time

Not the first time this has happened –

Even the 1st test was under the eye of the storm as fans back then had called out Aleem Dar. The Pakistani umpire decided to call the game ahead of time citing bad light issues. In that game, New Zealand were chasing and putting a spirited performance against the Pakistani bowlers.

New Zealand had set Pakistan a target of 319 and had the home team reeling at 0/2 at the end of day 2. When the final day began, Ish Sodhi went through the defences of Imam Ul Haq to earn Kiwis their 3rd wicket. Michael Bracewell then struck twice in a span of 2 overs. First he had Babar Azam caught by Latham for 27, then got the wicket of Shan Masood for 35 caught by Williamson.

Pakistan went to lunch at 85/5. But post the break former skipper Sarfaraz and Shakeel added 123 runs in 43 overs. The duo were cautious to begin with but once the Kiwi bowlers were tired, they went for broke. Shakeel was out to Bracewell for 32 after facing 146 balls.

Former skipper Sarfaraz Ahmed replaced Mohammad Rizwan in the XI and after scoring 3 half centuries before this finally made it count in the 4th time. Ahmed scored his 4th test ton and kept the score board ticking.

New Zealand comeback into the game –

Agha Salman joined Ahmed and added 70 runs for the 7 wicket in 17.5 overs before Salman fell for 30, bowled by Matt Henry. The next to go was Hasan Ali when he was out LBW to captain Southee for 5. The last piece of resistance in Sarfaraz Ahmed was gone when he fell for 118 caught by Williamson off Bracewell. Pakistan were 287/9 with 39 balls left to play and 32 runs left to get.

Naseem Shah then swung the blade to scored 15 off 11 balls with 2 fours and a six along with Abrar Ahmed who was on 7 off 13. That’s when Aleem Dar decided to call time on the call and possibly rob the fans a classic end to one of the most riveting final day’s in modern history.

Karachi test’s drawn affair had the fans seeing red as they took to Twitter and vented their ire. You can read all the tweets below.

Home umpires shouldn't be allowed to do umpiring imo

One of the most baised umpiring seen today. Such a shame Aleem Dar.
Diminished the magic of test cricket.
Should be banned.#PAKvNZ

I just can't understand the rules and umpiring in cricket.
If both the sides were ready to play why these umpires have to play spoilsport.

I just can't understand the rules and umpiring in cricket.
If both the sides were ready to play why these umpires have to play spoilsport.