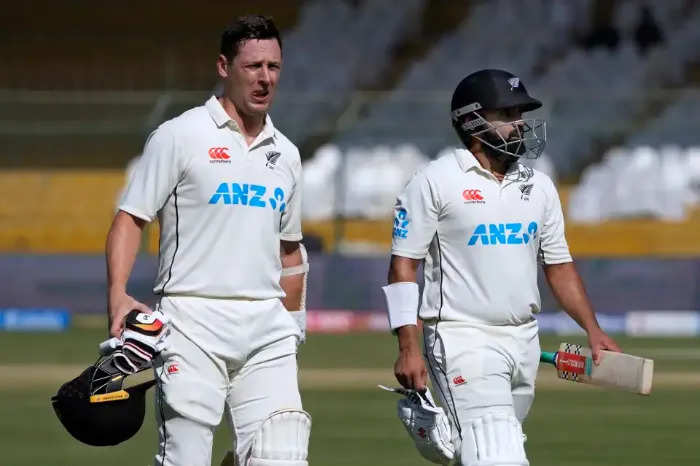 After a dull draw in the first test between Pakistan and New Zealand, the 2nd test match is seeing some action. The kiwis have come out with a determined effort to put the hosts under pressure at Karachi.

At stumps, the visitors had got 3 wickets to leave the hosts at 154/3 still trailing the Kiwis by 295 runs. New Zealand ended the 1st day at 309/6 with Tom Blundell and Ish Sodhi at the crease as the stumps were drawn at the end of the day.

The 2nd test match between Pakistan and New Zealand began on Monday with the first test ending in a draw. Kiwis had posted 309 at the end of day 1 with Devon Conway scoring a sublime 122. Naseem Shah and Agha Salman had done the damage with the ball after a century stand by the kiwi openers Conway and Latham.

Abrar Ahmed got into the act early after picking just 1 wicket on the 1st day. The first wicket of the day came when Sodhi was bowled by Shah for 11. Ahmed then struck twice in quick time. First getting Blundell bowled for 51, then having Kiwi skipper Southee stumped for 10.

At 345/9 the home team would have hope for a quick end to the Kiwi innings. That did not happen as Ajaz Patel who isn’t known for his batting prowess joined Matt Henry in the middle. The pair added 104 runs in 24.5 overs as the Pakistani bowlers had no place to hide.

Henry scored his 3rd test half century as he stayed not out on career best 68 off 81 balls with 8 fours and 2 sixes. Ajaz Patel too got to his best test score as he scored 35 off 78 balls with 4 hits to the fence. The stand was broken when Agha Salman settled under the ball to catch and give Abrar Ahmed his 4th wicket.

Pakistan 3 down at stumps –

Pakistan tried to force the issue and score runs at quick pace as Matt Henry got the wicket of Shafique for 19. Shan Masood was the next to for 20 off 11 balls when he holed out to Conway to give Patel his 1st wicket. Babar Azam scored a brisk 41 ball 24 with 3 fours and a six before he was run out. At Stumps, Imam Ul Haq was not out on 74 along with Saud Shakeel who was on 13 off 75 balls.

The final wicket stand of 104 had the fans take aim at Pakistani cricket team and you can read all the tweets below.

A brilliant final stand by Matt Henry (68*) & Ajaz Patel (35) adding 104 from 149 balls to boost the total to 449 all-out after lunch on day two.
Both players notching Test PB's en-route to recording the highest 10th-wicket partnership by a visiting pair to Pakistan #PAKvNZ pic.twitter.com/IbPfMRmdRt

Highest Partnership for the 10th wicket in Tests in Pakistan:

From 234-1 to 279-6 and 279-6 to 449-10 .
Two different sides of a totally unpredictable team .
New Zealand will be very happy with this score .Credit to ajaz patel and Matt Henry for their brilliant inning 👏 .#PAKVSNZ #NZvsPAK pic.twitter.com/zSFkyzh3Mc

New Zealand at one point 345/9 and now they finish at 449. Matt Henry scored 68* and Ajaz Patel 35 runs against Pakistan in 2nd Test match. pic.twitter.com/Jj6F3EIHPN

New Zealand bowled out for 449 against Pakistan - a 104 runs partnership for the 10th wicket between Ajaz Patel and Matt Henry.