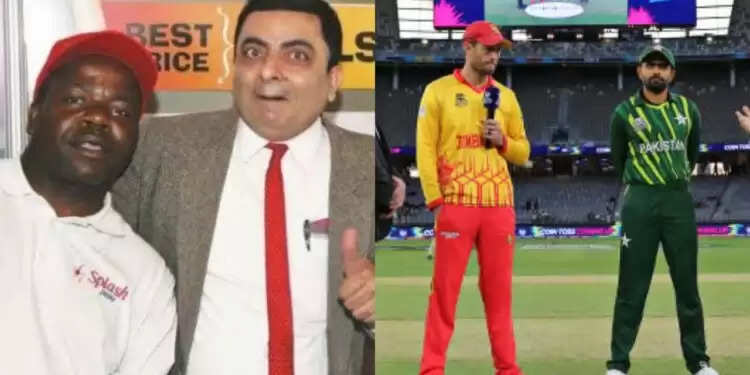 Zimbabwe sent shockwaves across the cricketing spectrum by beating Pakistan by a single run. The Zimbabweans were jumping for joy after condemning Pakistan to their 2nd consecutive loss. The most hilarious moment which has created a controversy happened after the game. The controversy also snowballed so much that the Zimbabwean president and Pakistani prime minister got into a twitter conversation about it.

Pakistan’s official twitter handle posted a picture of their players warming up and wrote “onto the next challenge”. This was in reference to their game on Thursday against Zimbabwe at Perth. This tweet elicited an angry response from a Zimbabwean fan who posted a rather hilarious message.

Pakistan had sent a person named Asif Mohammad who resembles the legendary Mr. Bean character which was played by Rowan Atkinson. Twitter user by the name Ngugi Chasura wrote “As Zimbabweans we wont forgive you.. you once gave us that fraud Pak Bean instead of Mr. Bean Rowan… we will settle the matter tomorrow just pray the rains will save you.. “

As Zimbabweans we wont forgive you...you once gave us that Fraud Pak Bean instead of Mr Bean Rowan ..we will settle the matter tommorow just pray the rains will save you...#ZIMVSPAK

The Pakistan fans were left scratching their head in dis belief at the motive behind the tweet by Mr.Chasura. Once the reason came to light it began to spread on the social media platforms like wildfire. The entire conversation got more Pakistani fans into the fray as they quizzed the Zimbabwean fan to give more details.

Two states of heads also have their say –

The win for Zimbabwe over Pakistan had their president Mr. Edmnangagwa also said to send the real Mr. bean while congratulating his team on Twitter. This got the attention of the Pakistani prime minister Shahbaz Sharif who too replied to the president of Zimbabwe. You can read both the tweets below as the Pakistani PM seemed a bit downcast with the tone of the Tweet.

Zimbabwe make a bright start to the tournament –

Zimbabwean team has qualified for the Super 12 stage for the first in their T20 WC history. In 2007 they famously beat Australia during the inaugural World T20 which was held in South Africa. After sharing points against South Africa, they beat Pakistan by 1 run and now have 3 points from 2 games. they next face Bangladesh on Sunday and will hope to keep their giant killing streak alive.

As Zimbabweans we wont forgive you...you once gave us that Fraud Pak Bean instead of Mr Bean Rowan ..we will settle the matter tommorow just pray the rains will save you...#ZIMVSPAK

A fake Mr Bean was once paid to come and perform in Zimbabwe in 2016. pic.twitter.com/IrM5pfqcoH

We may not have the real Mr Bean, but we have real cricketing spirit .. and we Pakistanis have a funny habit of bouncing back :)