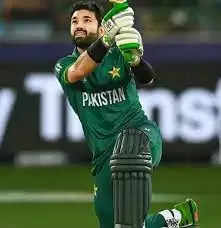 Pakistan cricket and controversy go hand in hand. Be it internal fights or be it spot fixing saga. The Pakistan cricket is a never ending soap opera which never ceases to amaze the people. Now a new controversy has erupted with Pakistani team doctor making a huge claim about Mohammad rizwan during the T20 Worldcup which happened last year in the UAE.

Pakistani cricket has rocked the world again as it has come to light that Pakistani wicket keeper batsman Mohammad Rizwan had to take banned substance before taking the field against Australia in the semi finals. Pakistan lost the semi finals to australia. Rizwan had played Blinder of a knock to score a 52 ball 67. Despite this Pakistan lost the game thanks to Matthew Wade who hit 3 sixes off 3 balls to seal the game and also win the world.cup for Australia.

According to the Pakistani team doctor has made some startling revelation. The doctor said "you were not able to breathe and I had to take permission from the ICC to inject the medicine. Usually it is prohibited for the atheletes,but since there was no option available we had to ask the ICC for permission to inject the medicine" Mohammad rizwan had recently said how he felt it was difficult for him to breathe befor the big game and against Australia and was on the verge of missing the game.