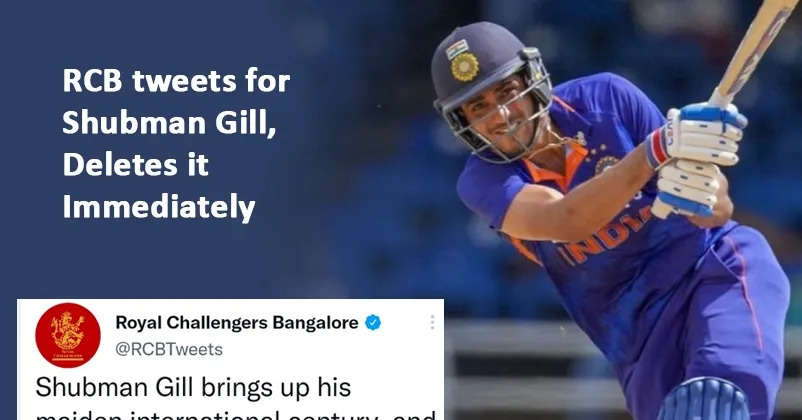 India and West Indies have just finished a series of 3 ODI games with the men in blue coming out on top in all 3 games. India won the first game by 3 runs, while the 2nd game saw Axar Patel score 64 not out with the bat. The 3rd game which saw various stoppages due to inclement weather. This meant West Indies had to chase 257 to win from 35 overs and India won the game by 119 runs. One of the best performances of the game was by Indian opener Shubman Gill who scored 98 not out while opening the batting along with Dhawan.

Indian fans are still waiting for the ODI century by an Indian with Rohit Sharma being the last batter to do so before COVID against Australia at Bengaluru. Gill was batting well and was on course to get a century when he was batting on 98 before the rain came down again. Thats when the Innings was ended. Gill looked heartbroken with the Innings ending on 98 but there was more happening off the field. RCB's official twitter handle jumped the gun and said "Shubman Gill brings up hs miaden International century and the timing of the knock couldnt have been more perfect, take a bow champ" once RCB realized that Gill was 98* they deleted the tweet. The eagle eyed fans though spotted this gaffe and started trolling RCB's twitter handle.

Gill shows his value with the bat -

Shubman Gill had just made his debut early in 2019 during the tour of NZ but since then has played in very few games. Gill scored his first ODI 50 during the 1st ODI when he scored 64 and was run out by Pooran. The next game saw Gill score 43 before falling to Kyle Mayers for 43 when he went for a DIl-Scoop and ended up giving an easy return catch to the bowler. The innings on Wednesday was one to remember for the 22 year old. Gill was seen cutting. pulling, flicking and driving at ease to score his 2nd half century. Dhawan the captain who opened the innings with Gill paid him the ultimate compliment when he said that Gill has shades of Rohit Sharma in his game. Gill score 205 runs in the series with an average of 102.5.