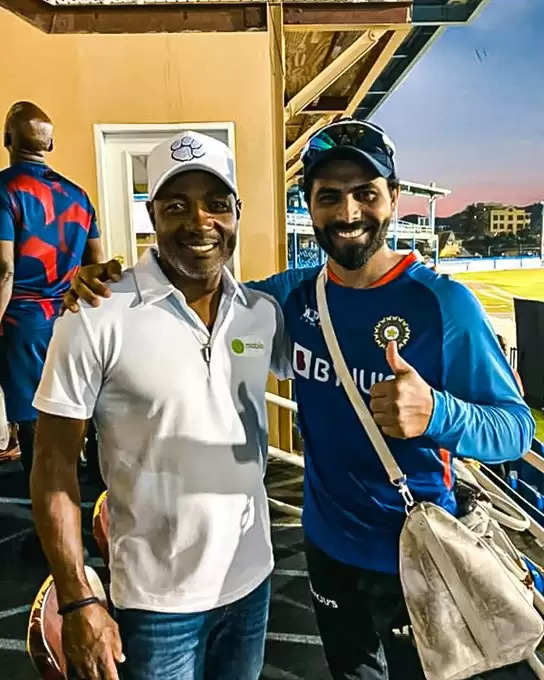 The Saga between Ravindra Jadeja and Chennai Super Kings is growing day by day and it is turning uglier. The once solid love affair between Ravindra Jadeja and Chennai Super Kings is now on a slippery slope. Jadeja over the last few months hasn’t hid his sadness and disappointment at the way he was treated post the entire fiasco over the captaincy. Jadeja has been giving open hints at his anger at the CSK management but the CSK powers to be always have maintained everything is fine between the two.

India are currently playing a short white ball series against West with the 3 ODI’s being played at Queens Park Oval. The ground happens to be the home ground for former West Indian great, Brian Lara. The left hander has a huge fan following in India and is one of the truly loved cricketers. Ravindra Jadeja who is in West Indies hasn’t played the first two games due to injury. The 33 year old Jadeja was snapped while posing for a picture with Lara.

Once the picture of Ravindra Jadeja and Brian Lara went viral, Chennai Super Kings took to twitter and wrote “Big fan of your work”. They also tagged the official handle of Ravindra Jadeja in the post. This post has garnered over 18,000 likes and gained over 50 replies.

Fans not pleased with CSK and slam Jadeja –

Chennai Super Kings fans are known to be a loyal support base and they give their heart and soul to every player who dons the yellow jersey. The latest stand off between Jadeja and Chennai Super Kings has certainly made the fans angry. CSK fans displayed their anger towards Jadeja. One user said “Guys pls don't post related to him I know as a admin ur love for ur franchise but it is not good seeing this guy who doesn't value our team.He is already ready for a new teamDont ask that what if he deletes posts he will be here so what's the point of deleting his memories/posts"

Jadeja recently posted a picture of himself in the Indian jersey and called it Blue love. Many fans lost the plot and called it Jadeja hinting at a possible move to Mumbai Indians. The CSK fans have a deep rooted rivalry with the MI fans and its team. another user wrote “When you cant ask jadeja for real photo because of rift, then you just take the ss of his story and crop it then post it. Welcome @ChennaiIPL" While a third user opined "But jaddu didn't like the post or in future also he will not like thus post."