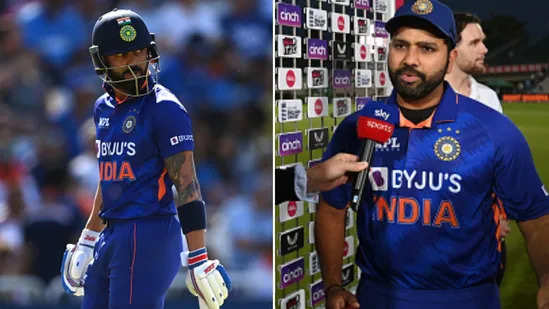 Indian cricket team is in the middle of a busy cricketing calendar and they have a lot of huge matches lined up ahead. It is decision making time for captain Rohit Sharma and BCCI as they finalize their squad for the World T20 later this year. One player who’s form has been a topic for concern has been Virat Kohli and he has been hogging all the headlines in recent times. Many former players and experts have sounded caution over his form and spoken about the need for him to take a break.

Indian cricket great Kapil Dev was in the news recently for his comments and opinions on Virat Kohli. The former world cup winning skipper had opined that Kohli should be dropped in favour of Deepak Hooda. Kapil had said “ If world No. 2 Test bowler Ashwin can be dropped from Test side then your No. 1 batter can also be dropped, If he (Virat) is not performing, you cannot continue to keep these boys (youngsters like Deepak Hooda) out. I hope there is a healthy fight for selection, the youngsters should look to outperform Kohli. But Kohli needs to think, 'Yes at one point I was a big player, but I need to play like that No. 1 player again'. That is a problem for the team, it is not a bad problem."

Indian skipper Rohit Sharma threw his weight behind Virat Kohli as he supported his team mate. Rohit was asked about Kapil’s comments post the game at Nottingham to which he responded by saying “He is watching the game from outside and does not know what is happening inside. We have our thought process. We build our team and behind this, there is a lot of thinking. We back the boys and give them opportunities. So, these things you do not get to know from outside. So, whatever is happening outside is not important but what is happening inside is more important for us,"

Rohit Sharma throws his weight behind Virat to find form –

Virat Kohli during his captaincy days had thrown a lot of weight behind a lot of players who were struggling form form. With over 75 innings since the last 100, the toungues have now started wagging more than ever. Rohit who has been through patchy form himself defended his former skipper and team mate when he said "If you talk about form then everyone goes through ups and downs. The player's quality does not get affected. So, we should keep these things in our minds. When a player is doing well for so many years, then one or two bad series does not make him a bad player. We should not overlook his past performances. We who are in the team know the importance of the player. They have got all the right to talk about it but it does not matter for us too much,"