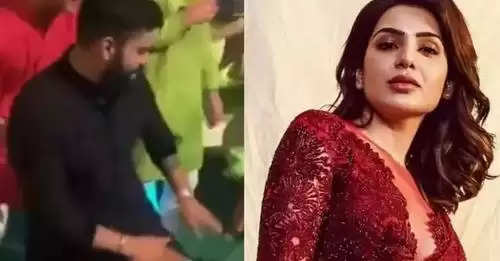 It has been a happy few days for Virat Kohli as he finally is showing semblance of coming back to form. The former RCB and India skipper scored a half century against Gujarat Titans in the afternoon game over the weekend. This came after prolonged failure with the bat where he had scored a mere 128 runs. The run also included 2 back to back first ball ducks and a 9 against RR prior to playing against GT.

While Kohli might have been struggling on the field with the bat in hand. The 33 year old was seen in full elements during the grand wedding party for Glenn Maxwell and Vini Raman who got married on March 27 this year.  The couple had thrown a lavish party for the near and dear ones. The party was attended by the entire RCB family and Kohli was seen breaking into an impromptu dance with Shahbaz Ahmed to the song oo antvava from the movie Pushpa. The South Indian actress Samantha Ruth Prabhu took to Instagram to show her appreciation when she put up a dance emoji tagging Kohli and Anushka Sharma.

Can Kohli continue his form?

Kohli scored his first half century of the season before falling to Mohammad Shami. It is a welcome relief for Kohli and RCB fans as the 3 time IPL finalists who are 5th in the table, look for a sustained run of good form with the bat for Kohli and hope it can propel them to the play-off places and possibly win them their first IPL title. RCB have lost their last there games and are in need of a win to stay alive for a place in the top 4.