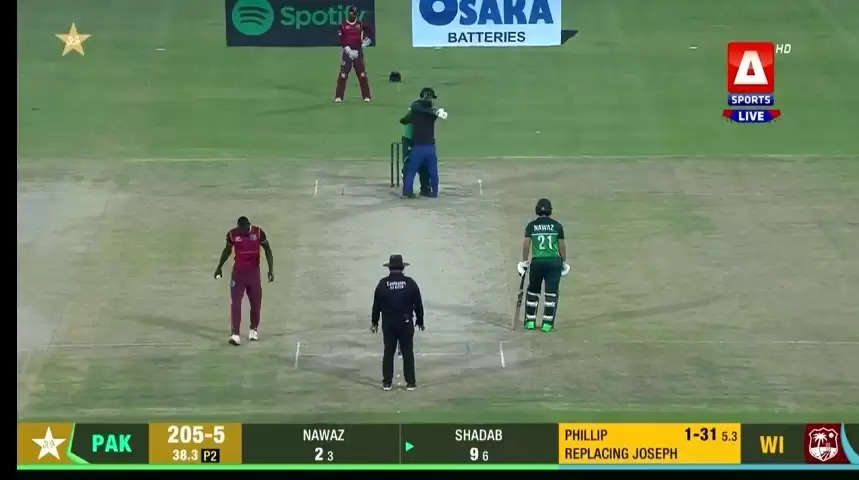 Pakistan and West Indies are playing a short 3 match ODI series at Multan, with the home team having taken a 1-0 lead. Pakistan won the first game thanks to Babar Azam who scored his 17th ODI ton. The 2nd game of the series was played on Friday and the home team wrapped up the series with a 120 run win over West Indies. It was a series loss for Nicolas Pooran in his very first series as full time captain for the former 2 time ODI world champs.

Pakistan were placed at 205 for 5 in the 39th over, with Anderson Philip running into bowl. The bowler who nearly delivered the had to stop in his run up because there was an intrusion on the field of play. There was a fan who stepped onto the pitch and had a few words with Shadab Khan who was batting and yet to open his account. The leg spinner then gave him a hug and the fan ran back very happy. Shadab went onto score 22 off 23 balls with 1 four and 1 six. With the ball he picked 2 wickets, that of Roamario Sheperd and Hayden Walsh. Shadab bowled 9 overs for 40 runs with a maiden to endure a satisfying day at the office.

Shadab Khan hugged the man who ran towards him from the stadium ❤️ , We'll gesture 🙌 #PAKvsWI #PAKvWI pic.twitter.com/jPYA69mkGV

Pakistan wins the game and the series –

Pakistan batted first and scored 275 on the board, with Imam Ul Haq scoring 72 and Babar Azam scoring 77. The home team suffered a collapse when they weren’t from 187 for 2 to 259 for 8, before finally ending up at 275. Chasing 276 to win the visitors lost wickets at regular intervals. Brooks with 42 was the top scorer as 6 batsmen were out to single digit scores. Mohammad Nawaz was the wrecker in chief with four wickets, while Mohammad Wasim Jr got 3 wickets with Shadab picking 2 and Afridi picking 1. The win meant Pakistan now have a 2-0 lead in the 3 match series with the final game being a dull affair.