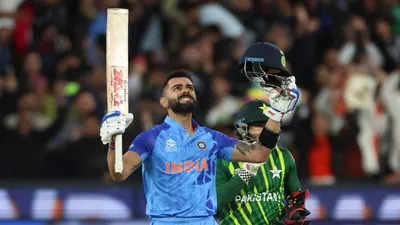 Indian cricket team is ready for one final battle during the Super 12 stage of the 2022 T20 World Cup. On Sunday the Indian team will face off against Zimbabwe in the final game of the Group 2 of the Super 12 Stage. All India have to do is beat Zimbabwe to secure their place in the top two of the table and move into the Semi- Finals of the world cup.

Saturday, November 5th 2022 is a huge day for Virat Kohli as he celebrates his 34th birthday. The former Indian captain has been one of the most loved superstars in India and is a global phenomenon thanks to his huge social media presence. Kohli, has a craze that has just been seen for Sachin Tendulkar during his playing Heydays for India.

Shahnawaz Dahani puts out a tweet to wish Kohli –

Pakistani pacer Shahnawaz Dahani played against India during the recent 2022 Asia Cup. The lanky pacer known to clock good speeds took to Twitter and wrote “just couldn’t wait for 5th November to wish the artist who made cricket the most beautiful. Happy Birthday @imVkohli the #GOAT . enjoy your day brother and keep entertaining the world”

Just couldn't wait for 5th Nov to wish the artist who made cricket the most beautiful. Happy birthday @imVkohli the #GOAT𓃵. Enjoy your day brother & Keep entertaining the world. ❤️🎂. pic.twitter.com/601TfzWV3C

Kohli in prime form in the Super 12 stage –

Virat Kohli after a prolonged lull in form has gotten back to his run scoring ways. He began the 2022 T20 World Cup with an unbeaten 82 versus Pakistan. Kohli then followed it up with an half century against Netherlands. Against South Africa, Kohli could score only 12 before making up for it with a match winning half century against Bangladesh.

Kohli so far is the leading scorer in the tournament with 220 runs and has hit 3 unbeaten half centuries. Kohli has been in tremendous form in each game and will hope to take this form for the Sunday’s game against Zimbabwe.

India in good position to finish at the top –

Melbourne Cricket ground will be the venue just 2 weeks after India pulled off that amazing win over Pakistan. An Indian win on Sunday will take the team to the top of the table and potentially miss facing New Zealand in the Semi Finals. A win for England on Saturday against Sri Lanka will knock out Australia. The English will then take the 2nd spot and most likely play against India in the final four game to be played next week.