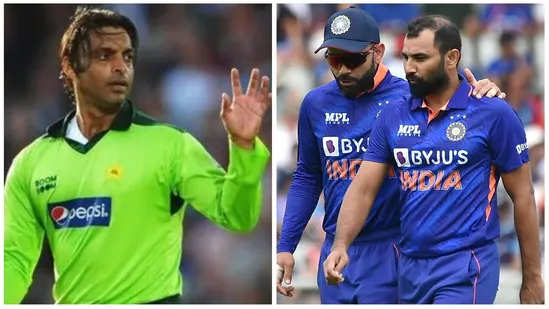 The 2022 T20 World Cup Final might be over, but the war of words have just begun. Pakistan and England played the final of the 2022 T20 World Cup on Sunday at the MCG. Jos Buttler and his men won the title with 5 wickets in hand an over to spare as Ben Stokes hit the winnings runs, to spark massive celebrations.

Post the game there was euphoria in England but sadness and emptiness at Pakistan despite their lucky run to the finals which shocked many fans across the cricketing world.

The reply by Indian fast bowler did not go down well with the former Pak Pacer as he seemed riled up. Akhtar took to social media and posted a tweet by Harsha Bhogle and called it Sensible Tweet. In the tweet, Bhogle had given his views on the Pakistani bowling and congratulated it. Akhtar also went on to laud his team’s bowlers and said “Well done Pakistan bowling. You have done well throughout the World Cup and got Pakistan to the final. There was luck involved but you have played well Pakistan”

Yet another disgruntled Pakistani former cricketer lashed out Shami and it was none other than Shahid Afridi. The former Pakistan skipper said “Agar aap retired player ho... tab bhi nahi karna chahiye. Par aap current team se khel rahe ho, avoid karo inn sab cheezo ko”. Afridi further had a host of other things to say and asked Shami not to make such comments that could further affect the strained relationships between the two sides.