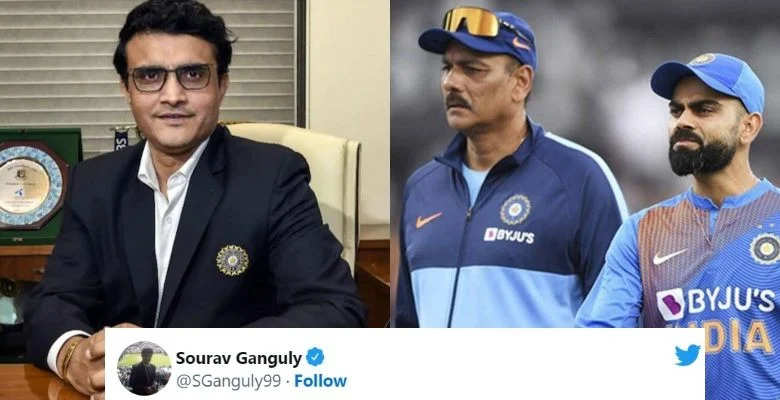 It is not even 24 hours after the huge Indian win over England in the Manchester ODI. India won the game by 5 wickets as they won the series 2-1 to become the first team in 8 years to beat England at home in a ODI series. The Indian fans were a happy bunch as they put the disappointment of the test loss behind. India won the T20 series with a 2-1 margin and beat the ODI world champs after a disastrous performance in the Lords ODI where they won by 100 runs.

Former India captain and current BCCI supremo, Sourav Ganguly too was pleased as a punch post this massive win. The 50 year old took to twitter to have his say on the win and wrote “Super performance in England… not easy in their country…2-2 test, win in T20 and one days… well done Dravid, Rohit Sharma, Ravi Shastri, Virat Kohli @BCCI… pant just special.. so is Pandu”

Sourav Ganguly as per many reports doesn’t share a good equation with Kohli and Shastri. Virat Kohli stepped down as the T20 captain just ahead of the T20 world cup last year in UAE. India went out in the group stages and soon Kohli stepped down as the ODI Skipper as well. Rohit Sharma was given the captaincy in both the formats, as fans felt Virat Kohli was given a raw deal. Ganguly also had a clash with Shastri before the latter could be appointed the coach of the Indian for the 2nd time.

The Virat Kohli and Ravi Shastri combine led India to new heights in the test format. The coach and captain duo saw India win their first Test series in Australia in 2018-19. India then won the series down under a 2nd time under Rahane as they turned a 1-0 deficit to win the series 2-1. It was under Kohli and Shastri combine that India took a 2-1 series lead over England during the 2021 test series.

Rishabh Pant’s with a special gesture towards Ravi Shastri –

Rishabh Pant scored his first ODI ton when he scored an unbeaten 125 not out to win the game and the series for India. At the end of the game, the Indian team was handed the trophy. Pant was seen giving his bottle of Champagne to former Indian coach Ravi Shastri.