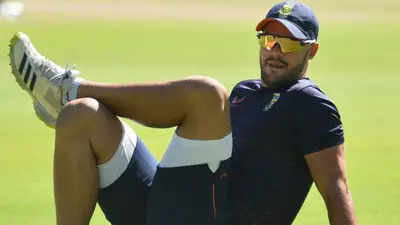 India and South Africa are gearing up to play the 4th T20 on Friday at the Saurashtra Cricket Association at Rajkot. The series is at 2-1 in favour of the visiting South African team. The first two games at Delhi and Cuttack went the way of the visitors, while India pulled one back at Vizag to win the game by 48 runs. If South Africa win, they keep their record of never losing to India in a bilateral series away in India to India. It will be heartbreaking for India and Pant as a loss would mean a series loss on captaincy debut for Pant.

Aiden Markram ruled out of the series –

South Africa were dealt with a major blow before the start of the 4th game of Friday. Star batsman Aiden Markram has been ruled out of the series. He hadn’t played the first 3 games as well after being laid low due to COVID 19. The South African Cricket board released a statement which read “Proteas batsman, Aiden Markram, has been ruled out of the remainder of the Proteas' tour of India. He spent seven days in quarantine after testing positive for COVID-19 last week and will not be able to complete his return to play programme in time to take part in the remainder of the T20 series”

Markram has been India since the start of the TATA IPL 2022 season, playing for Sunrisers Hyderabad. Markram, played all the 14 games scoring 381 runs for SRH with 3 half centuries. He had an average of 47 and a strike rate of 139 during the course of the season, as well as picking a wicket. Markram now returns home to be with his family and continue his recovery. The statement said “The player is healthy and well and has been cleared to return home to look after his mental and emotional wellbeing after isolation in a local facility, as required when an individual tests positive on tour”

No clarity over Quinton De Kock

Quinton De Kock who played the first game at Delhi, has been out for the last two games. The wicket keeper had injured his hamstring and the South African medical team said “Wicket-keeper batsman, Quinton de Kock, has made a marked improvement in his recovery from a wrist injury. The Proteas' medical staff will continue to assess his progress and make a decision on his availability for match four in due course”

The 4th game of the series will be played at Rajkot on Friday, and the last game on Sunday at Bangalore. The Visitors have a 2-1 lead in the series, as India will hope to win on Friday and square the series.