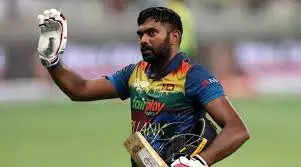 One Day International cricket isn’t really the flavor of the current era with the slam bang versions of T20 and T10 cricket. The recently held Australia vs England ODI series saw the attendances drop to a shocking low number amongst the cricket crazy fans down under.

The Sri Lankans are set to host Afghanistan for a short series starting on Friday in a short 3 match series. This is perhaps one of the few times the Afghans are getting to tour the Island nation since become a prominent ODI team.

Sri Lankan cricket team have been rocked ahead of the 1st ODI versus Afghanistan. The first match of the 3 is to be played on Friday. All the 3 games will be played at Palekelle with the next 2 games to be played on Sunday and Wednesday.

One person who will not be part of the ODI series is none other 31 year old Bhanuka Rajapaksa. The left handed batter who has played a key role for Sri Lankan cricket over the past few months will miss the 3 match Afghanistan series.

Rajapaksa stated his desire to be given a break from ODI series due to begin on Friday. The left hander will now be seen playing the T10 league which is taking place in Abu Dhabi after the SLC gives him a No objection certificate to take part in the league.

Bhanuka Rajapaksa played a huge role in Sri Lanka winning the 2022 Asia Cup title in August and September this year. The 31 year old has played 5 ODI games for Sri Lanka and scored 89 runs with a best of 65, his sole half century.

He has played 120 List A games and scored over 2800 runs with 3 centuries and 16 half centuries. The 31 year old was seen as one of the players who was at the heart of the revival of taking Sri Lanka to the top of the ladder in international cricket during this phase of transition.