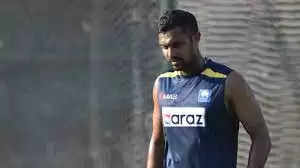 T20 World Cup 2022 has now reached the final stages as the group phase of the tournament is about to end. The hosts Australia are knocked as England and New Zealand make their way to the final four from Group 1 of the Super 12 stage. Sri Lanka who were riding high after winning the 2022 Asia Cup too have been knocked out of the tournament. There is more bad news for the island nation as one of its leading players is now facing legal issues in Australia.

NSW police have their say –

According to reports Gunathilaka happened to meet the woman on a dating site and this alleged encounter took place on 2nd November. According to the NSW police department “Sex Crimes Squad detectives have charged a Sri Lankan national following an investigation into the alleged sexual assault of a woman in Sydney's east last week,"

They further said on their website “The woman met with the man after communicating with him for a number of days via an online dating application; it's alleged he then sexually assaulted her on the evening of Wednesday 2 November 2022. As part of ongoing investigations, a crime scene examination was undertaken by specialist police at an address in Rose Bay yesterday. Following further inquiries, a 31-year-old man was arrested at a hotel on Sussex Street, Sydney, shortly before 1am today (Sunday 6 November 2022)”