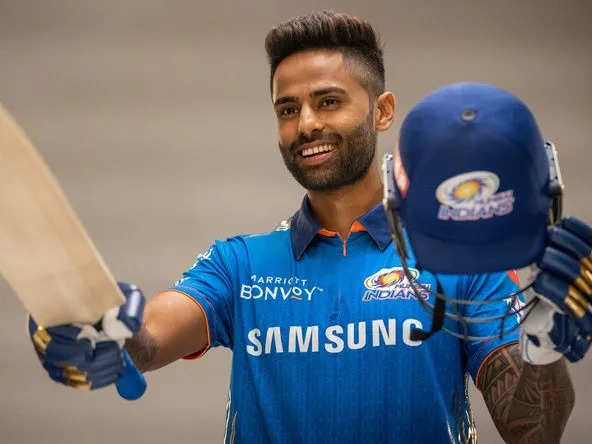 Indian cricket has found a new match winner and he goes by the name Surya Kumar Yadav. The 31 year old from Mumbai amazed the English fans during his 55 ball 117 during the final T20 at Nottingham. Yadav made his debut for India in 2021 against England, during their tour of India. Since his India debut, he has become a huge part of the white ball format for Rohit Sharma. Yadav made his IPL debut for Mumbai Indians before moving east to KKR where he played for 4 years. Since his comeback to MI in 2018, he has been a huge player for the men in blue and gold. SKY as he is fondly called helped MI win the IPL 2019 and 2020 seasons.

Surya Kumar Yadav recently picked his best IPL XI and slotted his MI and Indian captain Rohit Sharma at the top. Rohit is IPL’s most successful captain with 5 titles and has won one title as a player with Deccan Chargers. The other opener is former Mumbai player and now Rajasthan opener Jos Buttler. The 32 year old Buttler scored over 800 runs this season with 4 centuries.

SKY has put former India and RCB skipper Virat Kohli at number 3 and slotted himself at 4. At 5 he has put former South African great AB De Villiers who enjoys massive support in Bengaluru. At 6, comes Hardik Pandya the Indian all rounder who has found a new wind. Pandya played with SKY at Mumbai for 4 years before going to Gujarat and leading them to a title win. At 7 is powerful West Indian all rounder Andre Russell who is part of KKR and at 8 comes former CSK skipper Ravindra Jadeja.

Curious names in the bowling department-

As far as the bowlers go, SKY has included Afghanistan spinner Rashid Khan and Indian pace ace and MI team mate Jasprit Bumrah. It is the inclusion of Mohammad Shami which has raised eyebrow considering there are more bowlers with better numbers to have played the IPL.

Former SRH skipper and current Australian opener, David Warner is a bonafide IPL great. Reacting to the XI put up by Surya Kumar Yadav, the 35 year old said “cannot believe he left me out". Not only Warner, SKY has left out former India and current CSK skipper MS Dhoni.