TATA IPL 2023: Mumbai Indians likely to have a new opener for the upcoming season 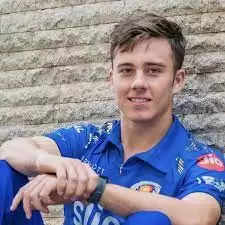 International Cricket is going around the world with full fervor. In the middle of this there is a never dose of franchise cricket as well. Big Bash League has been witnessing some amazing cricketing action since it began in late December. The newest league in town is the SA20 league which began on Tuesday 10th January with a huge fanfare. The first game of the league saw the Paarl Royals take on the Mumbai Indians Cape Town.

Mumbai Indians the five time champions had a campaign to forget during the TATA IPL 2022 season. Mumbai won just 4 games as they finished at the bottom of the table, just below Chennai Super Kings who also had 4 wins based on the run rate.

Mumbai Indians likely to name Brevis as the new opener –

The men in blue and gold are now set to have a new opener for the upcoming season. As per the rumors floating around, Dewald Brevis could be asked to open with Rohit Sharma. The move comes after Brevis who shone with the bat in the season opener of the SA20 against Paarl Royals.

Ishan Kishan opened the batting last year and did not fare as per expectations. This despite Mumbai paying over 15 Crores to buy the then 23 year old back during the mega auctions. Kishan started well with 2 back to back fifties but then his form drifted away as Mumbai’s season went from bad to worse.

Brevis lights up the stadium with his breezy knock –

Dewald Brevis was bought by Mumbai Indians during the TATA IPL 2022 auctions. The young South African has been compared to AB De Villiers for his batting. In the season opener of the SA 20 match against Paarl the youngster scored an unbeaten 70 off 41 balls with 4 fours and 5 sixes. This knocked helped MI Cape Town chase down the 143 run target in the 16th over with 2 wickets down.

Brevis played 7 games last season and scored 161 runs with a best of 49 at a strike rate of 142. He hit 14 fours and 11 sixes in total as he lost his place in the side in the middle of the tournament. Brevis made a comeback to the side towards the backend as Mumbai put together a few wins. In the final game against Delhi, young Brevis scored 37 off 33 balls with 1 four and 3 sixes. His biggest moment came against Punjab Kings when Brevis hit Rahul Chahar for 28 runs in an over with one four and 4 massive sixes, with one going over 100 meters.