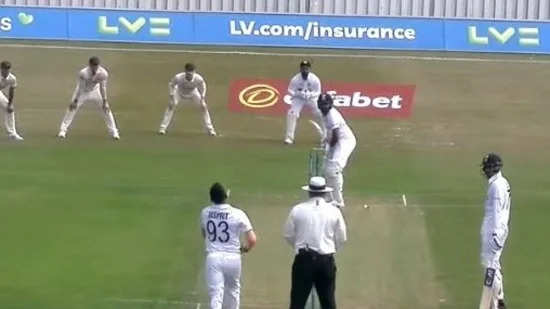 Indian cricket finally got down to action as they face off against Leicestershire in the only 4-day Practice game. India have some of the big players back in the form of Rohit Sharma, Virat Kohli and Jasprit Bumrah. The game will see 13 players take part in the game. Four Indian players have been slotted into the Leicester line up for match practice, the players being Pujara, Bumrah, Pant and Krishna. India won the toss and chose to bat first, Indian bowling will have the likes of Mohammad Shami, Siraj , Umesh Yadav and Shardul Thakur.

Ever since Jasprit Bumrah made his debut for Mumbai Indians and India, he has always played alongside Rohit Sharma. The two met face to face for the first time, as the 28 year old Bumrah was seen bowling to Rohit Sharma. The highlight of the day came when, Rohit Sharma played a beautiful cover drive off Bumrah. The ball eluded a diving Pujara and went to the boundary for a four. This contest was once In a lifetime view for the fans.

Rohit Sharma won the toss and decided to bat first, Gill and Rohit opened the innings for India. Gill was off the blocks quick as he scored 21 off 28 balls with 4 fours to his name. Will Davis got the first wicket, as he had gill edge behind to Pant, Rohit Sharma was looking in fine touch with the bat. The aggression of the Indian captain got the better of him when he was caught by Sakande off Roman Walker. Hanuma Vihari was soon out caught at slip for 3 off the bowling off Walker. At the time of writing this Shreyas Iyer was out for 11 ball duck caught by Pant off Prasidh Krishna to have India at 65 for 4. Jadeja had joined Kohli who was batting on 4 not out.

The rare chance to see Rohit and Bumrah face off against each other, had the fans in a frenzy and they took to twitter to give their views, you can read the tweets below.

Rohit vs Bumrah ❤️
This is peak cricket 💥 pic.twitter.com/3PRrNHQ1x6

Bumrah with a world class over to Rohit Sharma, the fact he mastered that outswinger for Test cricket just makes him so much more lethal. Insane weapon to have alongside that inswinger which is doubly effective with that natural angle.

This is going to be epic - Jasprit Bumrah bowling to Rohit Sharma and Shubman Gill. pic.twitter.com/HI6065xUyt