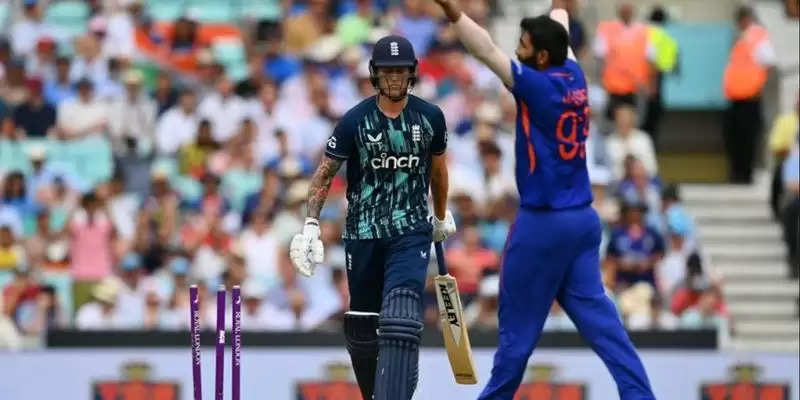 Overcast skies and a tinge of green on the wicket welcomed the Indian team for the first ODI. Rohit Sharma had no hesitation in putting the home team into bat as England began a new era. It was the first game since the retirement of Eoin Morgan the former English skipper who bought about a change. It was Jos Buttler’s first game as the ODI skipper as Virat Kohli missed the game for India due to groin strain.

England came into the game with Jason Roy and Jonny Bairstow opening the batting. Bairstow has been in red hot form with the bat in the test format as Shami and Bumrah took the new ball. Bumrah began the slide with a wicket of Jason Roy in the 2nd over for an duck. Joe Root who has been scoring centuries for fun was dismissed for a 2nd ball duck.

England test skipper, Ben Stokes came in to bat at number 4, but the first ball he faced he edged behind to Pant to fall for 0 off Shami. It was wicket number 3 for Bumrah when Pant dived to his right to pluck a one handed catch to dismiss Bairstow for 7. Livingstone walked down the track as he was castled by Bumrah to make it 26 for 5.

England got a mini stand of 27 going as Moeen Ali and Jos Buttler joined forces. Both the English batters were looking to score runs despite the early loss of 5 wickets. Krishna came into the attack and got the wicket of Ali caught and bowled for 14.

Post the fall of Ali, England lost the wicket of skipper Buttler for 30 which was their top score to become Shami’s 150th ODI wicket. It was soon wicket 151 as Shami castled Craig Overton for 8 to have England 68 for 8. Brydon Carse and Willey then added 35 to save the Home side the blushes. Carse was castled by Bumrah for 15 to give Indian bowler his 5th and soon it was 6th wicket for Bumrah when he bowled Willey for 21. It was the best ever bowling figures for an Indian in england

After England were bowled out for a mere 110, the likes of Akash Chopra, Harsha Bhogle, Wasim Jaffer came out to laud the Indian team. you can read all the tweets below.

Celebration by Dravid after Bumrah taking the five-wicket haul. pic.twitter.com/5dTBqL2Ztk