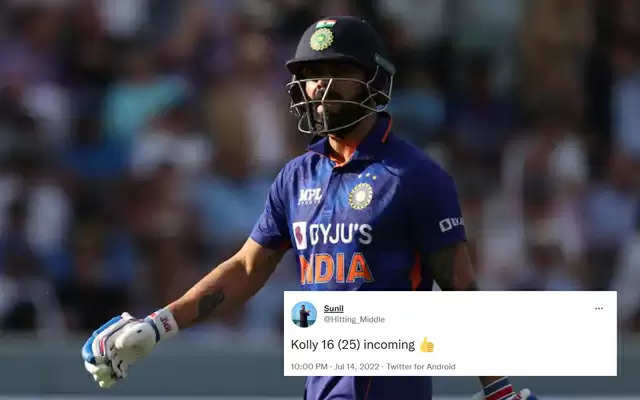 It was a terrible Thursday for team India as they lost the 2nd ODI at Lords by a massive 100 runs. The huge loss on Thursday meant that the game on Sunday at Manchester is a series decider. India had won the first game at Oval on Tuesday after Bumrah took a six wicket haul and Topley did the same in the 2nd game. It was yet another disappointing game for Virat Kohli has he failed yet again with the bat when he was caught behind by Buttler of Willey.

Chasing 247 to win, India lost their captain Rohit Sharma for a duck and in walked Virat Kohli. Kohli got off the mark with an off drive and followed it with a cover drive before getting into the groove with another on drive. India lost two more wickets with Shikhar Dhawan and Rishabh Pant falling quickly. Just when it seemed Kohli will take the team home, he was out for 16. One Twitter user named Sunil had earlier in the day written “Kohli 16(25) incoming”.

Indian bowling again came to the fore as Chahal picked 4 wickets and kept the world champions in check. India bowled out England for 246 and were looking favorites to win the game. Recee Topley though ripped the Indian top order and ended the game with figures of 6/24. Jadeja and Hardik Pandya top scored with 29 while Surya Kumar Yadav and Shami scored 20’s as India were all out for 146.

Earlier in the day, news came in that along with Chahal and Bumrah, Kohli too had been rested for the 5 match T20 series against West Indies. There were lots of voices who slammed the decision by the Indian selectors. Many former players questioned the logic behind resting a player who is already struggling for form with the bat.

Once the twitter user by the name Sunil had made the tweet and Kohli had got out for the same score, twitter was in disbelief. Indian cricket fans were left amazed at the accurate prediction and took to twitter to talk about. You can read all the reaction from the fans in the tweets embedded below.