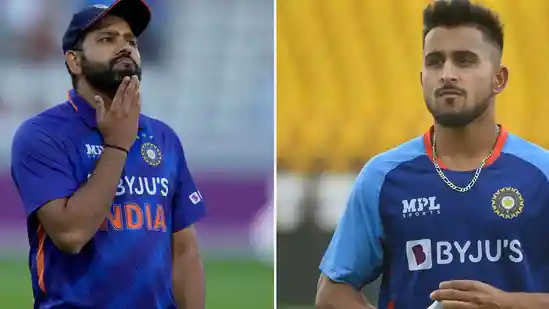 The Indian team tour of England is close to finish after a whirlwind 16 days starting 1st July. This Sunday, 17th July will see India play the 3rd and final game at Manchester as the ODI series is tied at 1-1. The Indian team will then fly down to West Indies to play 3 ODI games and 5 T20 matches. The squads have already been announced with Shikhar Dhawan captaining the ODI side. The Indian team T20 team will be led by Rohit Sharma as Virat Kohli has been rested for both the formats.

Rohit Sharma ahead of the T20 series against England had made a huge statement on Umran Malik. The Indian skipper said that the latest pace sensation was in the plans for the world cup. Umran Malik though was dropped for the West Indies tour, Rohit had earlier said “He is very much in our plans, it is just trying to give him that understanding as to what the team requires from him as well. Yes, there will be times where we want to try out a few guys and Umran is definitely one of those guys, keeping one eye on the World Cup, we want to see what he has to offer for us”

Aakash Chopra has his say on Umran Malik –

Former India opener, Aakash Chopra known for his thoughts on the game, had a say on the issue while taking to twitter. Chopra had tweeted “Umran Malik isn’t there in any of the two squads . ODI and T20… I’m pretty sure that he’s been spoken to already. Because it will be all about nurturing his talent going forward. Umran Malik shot to fame during IPL 2021 when he bowled at over 150 KPH. This year Malik picked 20 odd wickets and bowled at 157 KPH during a game against Delhi Capitals. He was picked for the T20 series against South Africa, Ireland and England. He played both the games against Ireland and the Southampton T20 versus England. Malik was hit for over 50 runs while picking a single wicket against England. This prompted Chopra to lament that Malik wasn’t ready for international cricket.

While Malik isn’t part of the West Indies, it is expected he will be part of the Indian team that is to tour Zimbabwe. The Indian team is slated to tour the African nation for a quick 3 match ODI series in August. The snub from the selectors though did not sit well with the fans as they vented their ire at Rohit Sharma and you can read all the tweets below.