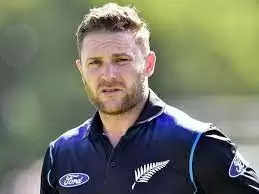 The 2022 season of TATA IPL is drawing to a close and the eyes of the world is on the exciting final stretch of the tournament. With the IPL now in its final stages before the all important play-offs and the big final, the focus shifts to international cricket. Every international team gets busy with a huge year of international cricket ahead of them. There is also the World T20 which will be played later this year. One team which is undergoing a change is none other than England.

Brendon McCullum in contention to be the coach of England’s test team!

One of the biggest changes that is happening is with the English test team, as they have a appointed a new captain in Ben Stokes. The 30 year old all-rounder replaced Joe Root after a run of poor results which saw England slide to 6th in the ICC test rankings. As per reports coming out, Ben Stokes wants former New Zealand skipper and current coach of KKR, Brendon McCullum to takeover as the coach of the test team. it was widely believed that Gary Kirsten the former Indian and South African coach is leading the race to the next English test team coach. Stokes as per reports has spoken to Rob Key and named his choice and named McCullum as a the preferred one. ECB had wanted to hire the former Kiwi skipper for the coaching role assigned to the white ball team.

Is McCullum the right choice?

McCullum has been the coach of the Kolkata Knight Riders since the 2020 season of the IPL. The first season he had a major run-in with then Skipper Dinesh Karthik, who was replaced mid-season by Eoin Morgan. The next season in 2021 saw KKR make a bad start but turned their season around to reach the final of the tournament where they lost to CSK. This year KKR made a good start winning 3 out of the first 4 games, before a string of losses. Captain Shreyas Iyer according to sources has fallen foul of the Kiwi and hence made the comments about the regular team changes. KKR are still in within shout of making the top 4 and qualifying for the play-offs by the barest of margins. Another loss for the Kolkata based outfit means they are out of the tournament along with CSK and Mumbai.