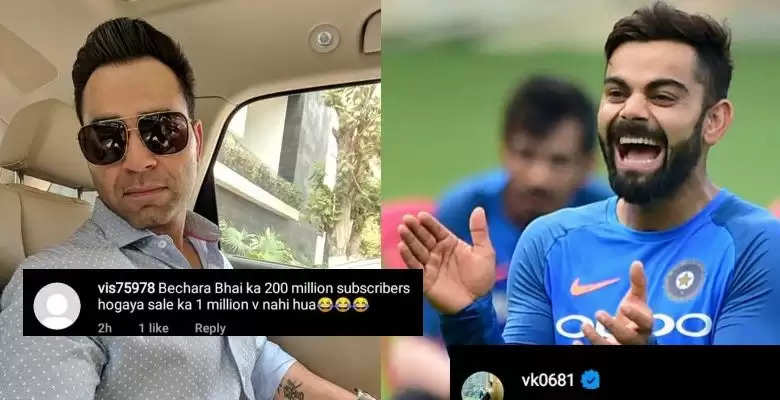 Indian cricket can be a very hard place, as the players are under constant pressure to perform. When the player is in form, he is lauded by one and all including the experts, media and the fans. When the player doesn’t perform well, not only the player but also the family has to face the brunt of criticism. While few fans can be light hearted in their views, some can be rude or sometime even mocking in their approach.

Virat Kohli is not only a popular face on the field for his batting, but also off the field. Thew 33 year old overtook Neymar and became the 3rd most followed sportsperson behind Ronaldo and Messi. Kohli completed 200 million fans on Instagram which shows the wide appeal he has amongst the fans. Kohli who posts on his Instagram page be it his family pictures or his training is a popular face across age groups. This has enabled him to over 200 Million fans on Instagram a popular site to post pictures, videos and reels.

While Kohli might be a well loved name in  India, there are some who cannot really go without sullying the mood for someone. Once the news of the milestone came out, one fan wrote to Vikas Kohli who is Virat’s older brother. The fan wrote “Bechara bhai ka 200 million subscribers ho gaya sale ka 1 million v nahi hua”. To which Vikas replied “bache kuch productive karo.. yaha gyan mat banto”. The fan interestingly thanked Vikas for his reply with hearts in his eyes emoji. Vikas Kohli for his part has 134,000 followers on Twitter.

Huge comeback on the cards?

Virat Kohli for long hasn’t been in the runs, as the former India captain is on a break . Kohli scored just above runs during the TATA IPL 2022 season. He had two fifties to his name with 3 golden ducks. His last century came against Bangladesh in 2019 during India’s first ever Day and Night test. Kohli has seen his batting average drop and hopes to come back to his best post the rest. Kohli is missing the 5 match T20 series against South Africa. He has been named in the test squad for the rescheduled final test which starts on 1st July.