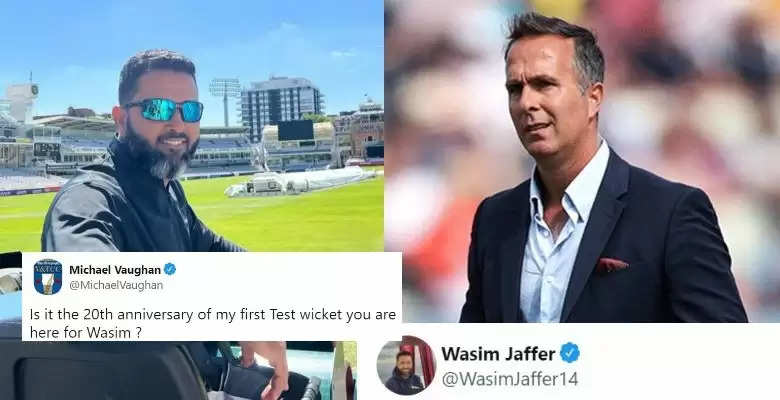 India and England are getting ready to face off against each other and finish off business from last year. India had toured England for a five match test series last year, which started the next cycle of World Test Championships. After the first four tests, the score stands at 2-1 in favour of India. The Indians had won the tests at Lords and Oval, while Joe Root won the test match on his home ground at Leeds. The final test was to be played at Manchester, but COVID put paid to the hopes.

Jaffer gets welcomed by his old friend with a gentle reminder –

Cricket fans on twitter are well versed with the rivalry that is enjoyed between Michael Vaughan and Wasim Jaffer. Both have traded barbs at each other, albeit in a friendly manner. Wasim Jaffer reached England and took to twitter and wrote “the sun is shining and the weather is sweet @homeofcricket”. Once Jaffer put out this tweet, former England captain Michael Vaughan was quick to respond. Vaughan wrote “is it the 20th anniversary of my first test wicket you are here for Wasim?”

Jaffer has the last laugh –

Wasim Jaffer has always entertained fans with his witty comments and tweets ever since his retirement. The former India player was quick to reply and it was brutal as his pull shot. Jaffer wrote “here for the 15th anniversary of this Michael” and put up an image of India winning the series in 2007. Jaffer was the opener of the team along with Dinesh Karthik. India won the 3 match series 1-0 after winning the Nottingham test, Michael Vaughan was the captain of the England team. Current India coach, Rahul Dravid was the skipper of the Indian side during the 2007 tour.

India will play the fifth and final rescheduled test against England at the Edgbaston ground in Birmingham. The match begins on 1st July with both the teams having two new captains. Rohit Sharma and Ben Stokes will tasked with leading the sides as the two teams will look to win the game and keep their chances of making the WTC final alive.