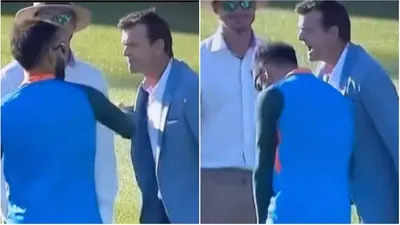 Indian cricket sits pretty at the top of the table after winning their 1st two games. India beat Netherlands by a huge margin to solidify their place in the top of the table for Group 2. India had beaten Pakistan on Sunday in a last ball thriller to seal the game by 4 wickets.

The Indian cricket team and its fans have been overwhelmed with the way Virat Kohli has played so far this tournament. The 33 year old has scored 2 back to back fifties and has set the marker with the bat early in the tournament.

India were in Sydney to play the game against Netherlands. The early morning rains gave away to the sparkling sunlight during the course of the evening. The former Australian wicket keeper great was seen walking up to Virat Kohli who was with Dale Steyn.

Gilchrist was seen grabbing Kohli’s hand and giving it a wild jerk as the two were seen having an amicable and friendly conversation. The two men exchanged some words as the trio went their separate ways in the 11 second video which has gone viral.

South Africa challenge for India next –

India and South Africa are set to lock horns yet again for the final time this calendar year. The two teams have already played each other in 7 T20I games with India leading 4-3. The game on Sunday will be played at Perth and a win for India more or less confirms their place in the final 4.

The South Africans are also coming into the game on the back of a huge win over Bangladesh on Thursday. Rilee Rossouw scored 109 which was his 2nd successive century to help South Africa score 205. Anrich Nortje with 4/10 then bowled out Bangladesh for 101. The game will be played on Sunday at 430 PM India time at Perth.

Virat Kohli came into the tournament on the back of his 71st century and his 1st T20I century for India against Afghanistan during the 2022 Asia Cup. Kohli then scored 63 during the Hyderabad T20I vs Australia. During the two games so far that has been played Kohli scored 82* vs Pakistan and 62* vs Netherlands at SCG. He has been unbeaten in both the games and the fans will hope he continues in the same vein of form against South Africa on Sunday to help India win their 3rd game of the tournament.