Watch! Afghanistan fans have a fracas with the Pakistani fans post the game 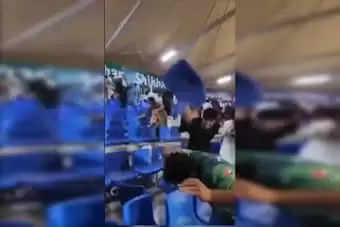 The line up for the finals is confirmed as Sri Lanka will face off Pakistan in the final on Sunday. The game on Wednesday, was important for both India and Afghanistan, as a win for the Afghans would have kept both the teams in the fray. It was a nervy affair at Sharjah Cricket Stadium as both the teams were seen trying to outdo each other in the game. Naseem Shah turned out the hero of the game as he smacked to sixes to win the game for Pakistan.

Afghanistan and Pakistan fans fight in the stands –

Pakistan needed 11 off 6 balls and the first 2 balls of the final over saw, Naseem Shah hit 2 sixes to win the game. Just before the final over could begin, there was a near physical altercation between Asif Ali and Fareed Ahmed. There were words exchanged between the two and nearly turned nasty as the umpires intervened. Post the game, the fans were seen throwing the plastic chairs at each other. There was a huge melee and pandemonium in the stands with both sets of fans going for each other.

Both India and Afghanistan play on Thursday at the Dubai International Stadium, this would be the 2nd game for the Afghans in 2 days. The match has little significance as both the teams have been knocked out. India the double title winners lost their game to Pakistan on Sunday, while losing yet another close game on Tuesday to Sri Lanka. Afghanistan began the tournament with crushing wins over Sri Lanka and Bangladesh before losing the two Super 4 stage games to be knocked out.

Finals confirmed as Pakistan and Sri Lanka contest for the trophy-

Sri Lanka and Pakistan will face off each other on Friday in the super 4 stage game, but the two teams are also set to play each other on Sunday. The final of the Asia Cup will see the resurgent Sri Lankan side take on Pakistan for the biggest prize in Asian cricket history. Both the teams have played well during the tournament, with the Lankans in particular stepping up big time.