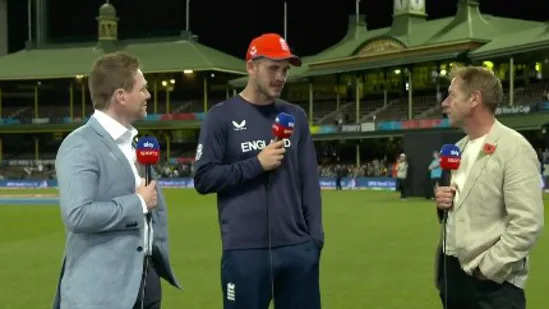 England cricket team are in a period of transition across every format of the game. In test cricket, Joe Root stepped down to make way for Ben Stokes. Under Brendon McCullum the results are to seen as the English test team has adapted to the Baz-Ball.

The history between Alex Hales and Eoin Morgan -

Alex Hales has failed the door tests two times before the 2019 ODI cricket World Cup. He also had a battle with a fan after jumping in defense of his mate Ben Stokes outside a nightclub. Alex Hales at that point was one of the best white ball players in the world. Eoin Morgan then decided to drop him and ensured there was.no way back for the tall right handed back into the English set-up. Hales did not feature for England in the world cup winning squad of 2019.

Akward face off ensues between Hales and Morgan -

Alex Hales played a crucial knock to give England a brisk start to the chase versus Sri Lanka. Hales added 72 runs for the first wicket with Eoin Morgan. Despite losing a few wickets in the middle overs, Ben Stokes heralded the chase to win the in the last over.

Post the game Ian Wars and Eoin Morgan were doing the player interviews for SKY cricket. The moment arrived when Alex Hales walked up to have his say about the game. The right handed batter completely looked past Eoin Morgan and gave him the cold shoulder while ignoring him throughout the interview. Hales only spoke and replied to Ian Ward in akward conversation which has gone viral on the social media.

Alex Hales didn't even look for a second towards Eoin Morgan. 😂 pic.twitter.com/3wMjNhrS6S

Alex Hales makes a strong come back after lucky break

Alex Hales spent 3 years away from the England set up and played T20 leagues across the world. Hales, wasn't part of the original set up for the England team. Jason Roy was dropped owing to his poor form, while Jonny Bairstow suffered an injury to rule him out of the world cup.

Hales made his return to the England side during the Pakistani tour. England won the series 4-3 with Hales making a huge contribution to the side. Hales has continued his good run of form during the ongoing T20 World Cup which has helped them reach the semi finals. India will run into an in form Alex Hales and English challenge at the Adelaide oval on Thursday in the second semi finals