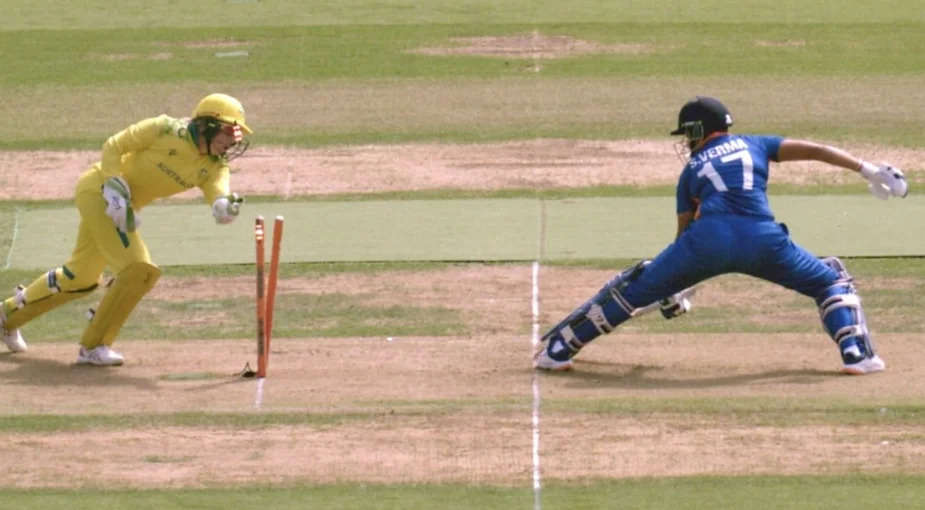 Commonwealth games kicked off in earnest on Friday with many nations taking part in the competition. This year cricket is being played with the T20 format as only the womens team are taking part in the tournament. India are placed with Arch Rivals Pakistan, World champs Australia and power houses Barbados from the Caribbean islands. India and Australia played the first game on Friday to kick off the cricketing blockbuster as part of the tournament. The match was played at Edgbaston Cricket Ground in front of a packed audience in the Group A of the tournament.

The incident happened when India were batting and Shafali Varma was on strike. the young opener was looking in fine form with the bat as she was scoring runs at quick pace. Thats when she got a ball down the leg side. Healy collected the ball and later took down the stumps. Healy though dislodged the bails without the ball in hand. The matter was sent up to the third umpire and after a lot of deliberation the decision was given as not out.

India score 154 thanks to 50 from Harmanpreet Kaur -

Batting first, India opened with Smriti Mandhana and Varma and the pair were off the blocks quickly. Out of the 25 run first wicket stand, Mandana scored 24 runs from 17 balls with 5 fours. Varma was the 2nd highest scorer with 48 from 33 balls with 9 hits to the fence, captain Kaur was the top scorer with 52 from 34 balls with 8 fours and a six. Rodriguez scored 11 but a steady fall of wickets meant India finished at 154 despite looking good to reach above 175.

Renuka Singh Thakur got India off to a good start when she removed the first 4 Australian wickets in a hurry. At one point Australia were 49 for 5, before Gardener and Harris added 51 for the 6th wicket. The fall of Harris saw Alana King join forces with Gardener and take the Australians home with a 3 wicket win with an over to spare.

In the other game, Barbados beat Pakistan to make a winning start to the tournament as Barbados batted first and scored 144 on the board. Knight with 62 and Mathews with 51 were the top scorers. Chasing 145 to win, the Barbados bowlers never let the Pakistani team settle and restricted them to 129 for 6 despite 50 by Nida Dar.

The next round on Sunday will see the blockbuster India vs Pak game as Australia take on Barbados in the other encounter.