Watch! An emotional Ben Stokes walks onto the field for the last time in ODI cricket 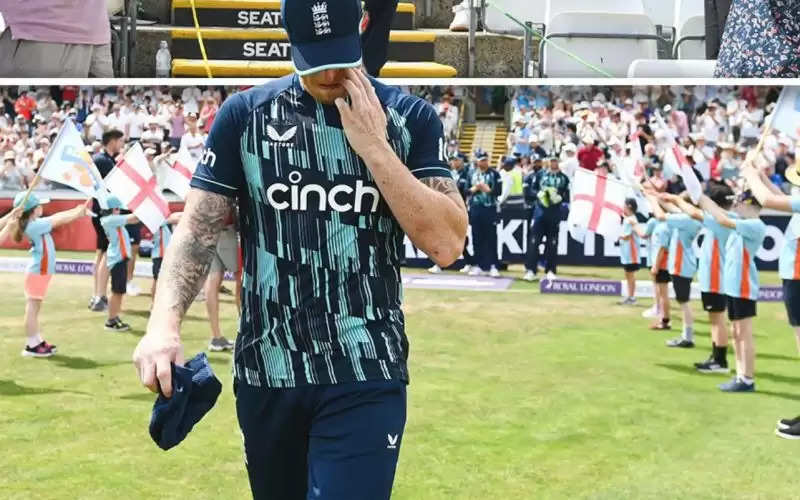 It was an emotional Tuesday at the Chester le Street Ground in Durham as Ben Stokes the local lad played his final ODI for England. The retirement of Ben Stokes at 31 has shook a lot of people as the decision was made public just 24 hours before the start of the series. Lot of voices came out expressed surprise and shock at the suddenness of the decision from Stokes. The retirement leaves a huge void for the defending ODI world cup champs as Eoin Morgan too had retired recently.

England stepped onto the field to play the first ODI against South Africa at Durham and local lad Ben Stokes led them onto the field. The cameras were focused on Stokes as he got a warm reception and one could see him wipe a few tears off his eye. Stokes was given a standing ovation as the players made their way down to the middle. The English players were seen warmly greeting stokes as they got ready for battle to face off against South Africa.

We will miss you Ben Stokes in ODI format. pic.twitter.com/dITQsSOiNh

South Africa batted first and opened with Janneman Malan and Quinton De Kock. The openers added 35 before De Kock was bowled by Curran for 19. Malan and Dussen then added 109 runs for the 2nd wicket. Malan was out for 57 falling to Moeen Ali against the run of play. It was the turn of Markram to stride out at 4 and he added 151 runs with Van Der Dussen. The South African number 3 got to his 4th ODI century and scored his career best 133 going past his previous best of 129. Markram was out for 77, while David Miller with 24 and Klassen 12 helped SA reach 333 on the board.

Chasing a massive 334 to win, England got off to a rocking start with Bairstow and Roy adding 102 for the first wicket. Captain Maharaj struck first when he had Roy caught by Miller for 43. Markram struck next when he had Bairstow trapped LBW for 63. Ben Stokes playing his last game was next to go to Markram LBW for 5. From there England kept losing wickets at regular intervals. Joe Root struck to fight for a while and scored 86 off 77 balls with 5 fours and 2 sixes. Anrich Nortje though put and end to his innings to end with 4 wickers for the night.