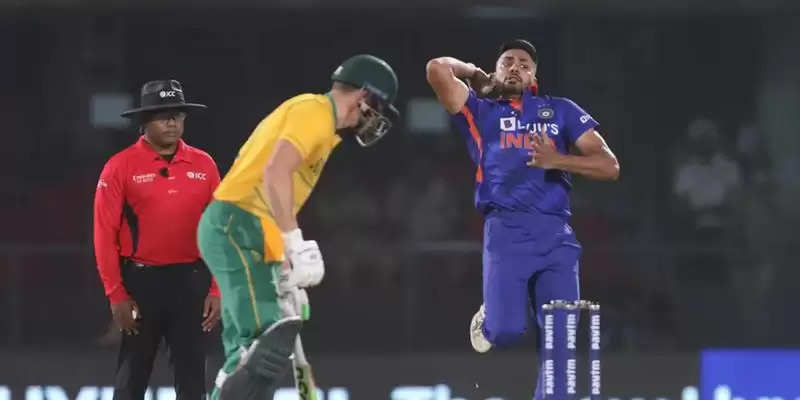 Arun Jaitley Stadium at New Delhi saw a packed crowd as India took on South Africa in the first T20. The men in blue were rocked a day prior when they lost KL Rahul and Kuldeep Yadav due to injury. Rahul who was originally the captain was laid low by a groin injury. Rishabh Pant took over as the captain of the side, while Hardik Pandya was named the deputy skipper. Kuldeep Yadav too was injured as the left arm china-man who was in amazing form during the IPL had to withdraw.

India did not tinker much as they went with a set formula of playing the known names. Avesh Khan kept his place in the side and was expensive to begin with when De Kock went after his LSG team mate. In his 2nd spell, Avesh Khan seemed to be doing better as he was nailing the Yorkers. Rassie Van Der Dussen was struggling to time the ball and was going slow. That is when he got a yorker from Khan, which he dug out to see his bat split into two.

India had set the visitors a huge target of 212 and South Africa at one stage needed 120 runs from 9 overs. The task was made to look even more impossible because of the slow batting of Rassie Van Der Dussen. The commentators were wondering why he was playing so slow, but once he found his groove there was no looking back. Dussen was not out on 75 with 7 fours and 5 massive sixes. It took him 27 balls to reach 25 but just 19 balls to score the rest of the 50 runs.

India were looking for win number 13 that would have put them right at the top after having won 12 T20 games in a row. Ishan Kishan led the show with 76 off 48 balls, as Shreyas Iyer, Rishabh Pant and Hardik Pandya made useful contributions with the bat. In reply the brilliance of Van Der Dussen and the power of David Miller led the Proteas to a 7 wicket win with 5 balls to spare.

Avesh Khan breaking the bat of Van Der Dussen compelled the Indian fans to take to twitter. Everyone were praising the Indian bowler for his pace and you can read all the tweets below.

The Indian fan wearing an India jersey and seated behind Shreyas Iyer, who pumped his fists when Iyer dropped Rassie van der Dussen, is not anti-national but a certified fantasy cricket player. #INDvSA