Watch! Axar Patel’s does an MS Dhoni to finish the game with a six 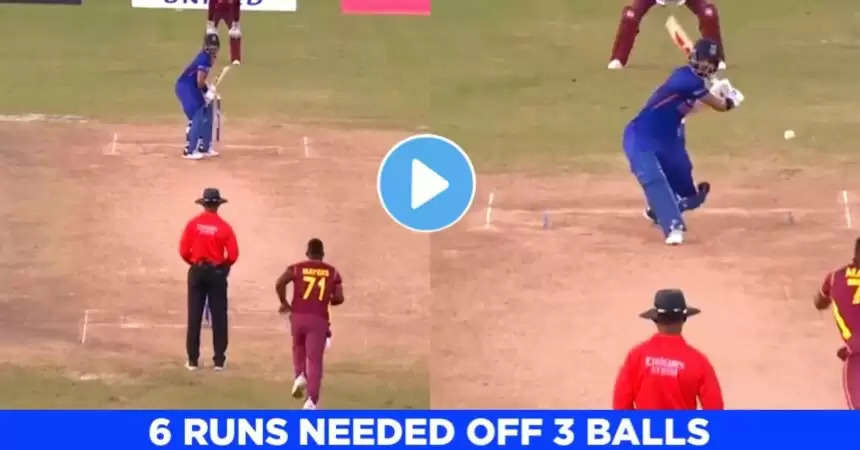 It was a sizzling Sunday as India won the 2nd ODI to take an unbeatable 2-0 lead in the 3 match ODI series. It was yet another series loss for West Indies against India as Nicolas Pooran and his men looked downcast. India won the 2nd ODI with 3 balls to spare and 2 wickets in hand. Axar Patel played a huge role in Shikhar Dhawan winning the series as the captain with a brutal half century that knocked the wind out of the sails of the home team.

The final over of the game, saw India needing 8 runs to win with 2 wickets in and Kyle Mayers was given the ball. The first ball was a dot ball as Patel swung and missed, the 2nd ball was a single. This got Siraj on strike and Mayers came round the wicket and bowled a full yorker. Siraj dug out the Yorker and took a single, this meant India needed 6 runs off 3 balls. The tension was in the air as Mayers, ran in and bowled a low full toss. Axar Patel who was batting on 58 at that point hit the ball straight down the ground for a six to win the game for India.

The winning six by Axar Parel when India need 6 from 3 balls, a fantastic finish. pic.twitter.com/miSwDLeQVO

India were chasing a huge 312 run target, and when Sanju Samson fell for 54 via run out, India still needed 107 runs from 68 balls. The last ten overs of the game saw India needing exact 100 from 10 overs. That’s when Axar Patel cut loose and hit the West Indian bowlers all over the park. Patel playing his 40th ODI for India, scored his maiden half century for the men in blue. Patel came in for Jadeja who had injured himself before the start of the series made sure the Indian team did not miss the 33 year old from Saurashtra.

Axar Patel finished on 64 not off off 35 balls with 3 fours and 5 sixes to help India win the game and the series. The final ODI will be played on Wednesday at the same Queens Park Oval ground at Trinidad and Tobago.