Watch! Barry McCarthy pulls of a stunning save to save six runs as twitter reacts 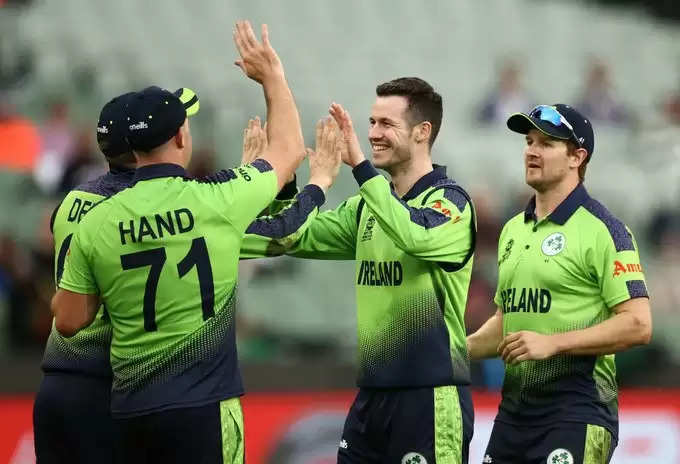 Australia and Ireland faced each other on Monday at the Gabba stadium at Brisbane. The two teams saw their respective matches being rained out in the last round. Australia needed a win to keep their hopes alive for a place in the semi finals of the 2022 T20 tournament. Ireland has beaten England in their last game by 5 runs due to the duckworth Lewis method. The teams needed a win and the match was hence a crucial encounter.

Ireland win the toss and elected to bowl first. The Australian team had Adam zampa back in the team. Australia were placed in the 4th place as New Zealand and England were sitting in the top two of the table.

Barry McCarthy makes a brilliant save

Marcus Stoinis was batting when he faced Mark Adair in the 14th over of the innings. The Australian all rounder smacked one down the ground. Benny McCarthy started making a run as the ball was headed for a six. The Irish bowler then jumped backwards and stopped a certain six. He felt the full brunt of the call as he hurt his back and had to be tended by the medical team.

Ireland won the toss and chose to bowl first. David Warner was out for yet another single digit score as he was out for 3. Mitchell Marsh scored 28, while Aaron Finch scored yet another half century for Australia. Stoinis came out and swung his bat to score 35 off 25 balls with 3 fours and a six. This enbaled Australia to reach 179 on the board.

Lorcan Tucker scores 71 as Australia bundle out Ireland for 137

Chasing 180 to win, Pat Cummins, Mitchell Starc, Adam zampa and Glenn Maxwell picked 2 wickets wach. Marcus Stoinis picked 1 wicket as Ireland was bowled out for 137. Ireland lost the match by 42 runs to give Australia a push to make it to the final 4 stages of the tournament. For Ireland it was lorcan Tucker who top scored with 71 off 48 balls with 9 fours and a six in his innings.

The fielding effort by Barry McCarthy had the cricket fans in awe as they took to Twitter to have their say on the topic. You can read all the tweets below.

One of the unbelievable saves ever, take a bow, Barry McCarthy. pic.twitter.com/hqv4bkpktC

Unbelievable save by McCarthy. pic.twitter.com/viwMXYXtoJ

Barry McCarthy with the single best piece of fielding in the World Cup so far. That was incredible! #AUSvsIRE

IS IT A BIRD? IS IT A PLANE? NO! IT IS BARRY McCARTHY! #AUSvIRE pic.twitter.com/97arTKmF7j

Barry McCarthy being a brilliant, outstanding fielder while Zampa stands there like an old grandma being like “oh my days!!” pic.twitter.com/oTIei6tYpk

what a brilliant save from Barry McCarthy 😳😳#AUSvsIRE #T20WorldCup pic.twitter.com/4I1iejQ6SG