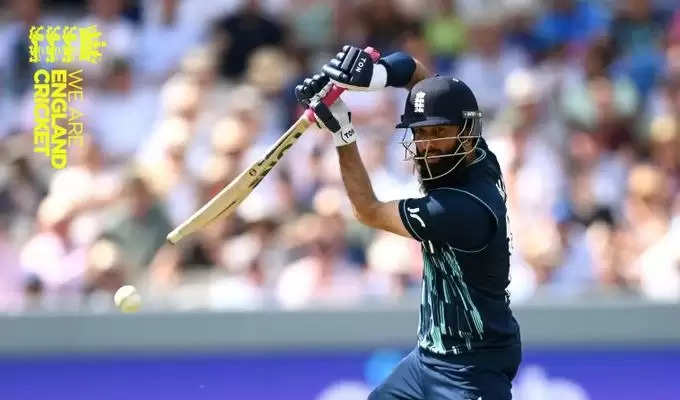 ODI cricket world champions England made a stirring comeback in the 3 match ODI series. England dominated the Indian team with a massive 100 run win at Lords on Thursday. England were under pressure after their dismal show with the bat on Tuesday when they were bowled out for mere 110. India managed to chase down the runs before the 20th over to take a 1-0 lead in the 3 match series. It was a different England at Lords as they showed their class and won the game to tie the series 1-1.

Indian bowlers were in the groove again as the English batsmen were clueless against the likes of Bumrah, Shami and Chahal. With the home side struggling, the Indian team faced stiff resistance from Moeen Ali and David Willey. The incident happened in the 2nd ball of the 37th over with Ali facing off against Prasidh Krishna. The 26 year old Indian pacer bowled one in the slot for Ali to free his arms and hit way above the leg side boundary for a huge six. The ball sailed deep and went out of the ground for a huge six. This shot impressed the English test skipper Ben Stokes and current white ball skipper Jos Buttler.

All to play for at Manchester –

England haven’t lost a home series since 2014, which they incidentally lost to India under MS Dhoni. India won the first game at Oval on Tuesday by ten wickets before Topley’s 6 wicket haul bought parity to the score line. The Indian batting was totally decimated thanks to the pace, bounce and swing bowling by Topley, who finished with figures of 6/24 which is his career best figures.

The big six by Moeen Ali and the reaction of Stokes and Buttler bought out the best of reaction from the Indian cricket fans. Twitter was abuzz with reactions from the Indian fans and you can read all the tweets below.

Moeen Ali has smacked one out of the Lord's 🤯💥#ENGvIND pic.twitter.com/Wj79C7lU5p

Moeen Ali has just hit one out of Lord's 💥#ENGvIND pic.twitter.com/vuTQTrtGpe

Jadeja took the catch of Moeen Ali
Clear rift between him and CSK.

Moeen Ali is the most underrated stroke player in this current generation of players, his bat swing is just a dream, makes it so easy to hit sixes on the on side#moeenali #INDvsENG

Moeen Ali hit two proper pick up shots for Sixes(One Vs Bumrah!!!) and even the one sweep vs Chahal by reaching and playing it on the rise, unlike what his teammates did, seemed like he's set AND he throws it away. These are the kind of games you should cash in the start you got.