Watch! Bhuvneshwar Kumar comes up with befitting reply to a journalist 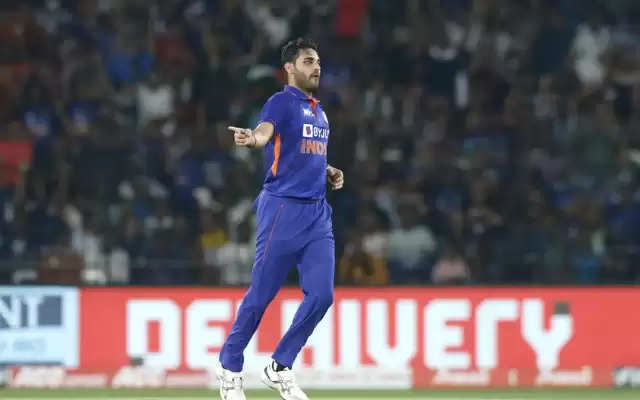 Indian cricketers are the most worked lot in the international circuit. The men in blue also are under constant scrutiny for the performances on the field of play. In recent times Virat Kohli has been under the scanner for his below par performances with the bat. Many former players have come out and spoken about the barren run from the bat of Kohli in recent times. In recent times yet another Indian player was under pressure and that happens to be none other than the king of swing Bhuvneshwar Kumar.

For nearly 2 and half years, the swing king of India Bhuvneshwar Kumar was a man under the pump. He was constantly injured and he had lost his pace and even the swing in his bowling. Now the 32 year old has made a stirring come back and was the lynchpin for India in the last few wins. Kumar bowled like his older self as he found the swing and also upped his pace.

Bhuvi snaps back at a journalist –

Kumar played a vital role in the 2 wins at Southampton and Birmingham T20 matches for India. He picked key wickets in the two games to help aid India and Rohit Sharma take a 2-0 lead in the 3 match series. A reporter asked the 32 year old bowler if he found any weakness in the Indian seam attack. To which the bowler replied “Ek match mein agar maar padd gayi toh aap hi weak bowler dhundengey. Woh aap agle match mein dhund lena “

Kumar the man in form with the ball –

After being whacked for 43 runs from his 4 overs at Delhi, Kumar has made a strong comeback with the ball. He not only has swung the ball but also picked key wickets for India. Kumar 4/13 in the game at Cuttack and dented the South African batting early. He picked1/21 at Vizag followed by giving just 8 runs in his 2 overs at Rajkot. He then picked 1/16 in the rain shortened game versus Ireland and went for 46 and picked a wicket in the 2nd and final game. Kumar swung the game back in India’s favor with some terrific final overs bowling. In the current series versus the English he played two games and picked 4 wicket while giving away just 26 runs in total from the 2 games from 6 overs he bowled.