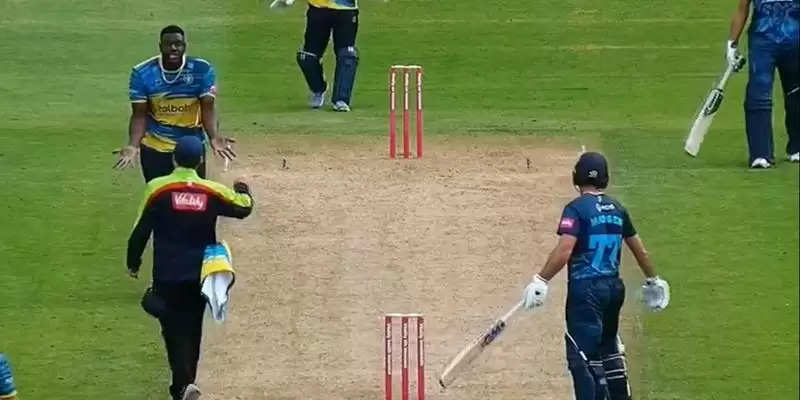 Cricket as they say is a gentleman’s game and the players are expected to behave like model professionals. The MCC has constituted rules which are meant to protect the image of the game. While the last few decades have seen some unpleasantry moments, the game on the whole is played with the right spirit. The Vitality T20 Blast has seen one such example when one player lost his cool during the course of the game.

Carlos Braithwaite has for long been one of the players who has amazed a lot of people with his talents with the bat. The West Indian famously hit Ben Stokes, for 4 big sixes to win his country the 2016 T20 world cup. The incident in question on Sunday in the game between Derbyshire and Birmingham. The Birmingham team was led by the big hitting West Indian all rounder. Braithwaite was bowling to Wayne Madsen and the match was poised in a delicate state. Derby needed 48 to win from 45 balls, when Madsen hit the ball back to Braithwaite. The West Indian picked the ball; and hit the batsman and Madsen who was on strike complained to the leg umpire. The bowler was quick to apologize, but the umpires awarded the Derby team 5 penalty runs.

Not ideal for Carlos Brathwaite 😬

A 5-run penalty was given against the Bears after this incident...#Blast22 pic.twitter.com/pXZLGcEGYa

Batting first, Birmingham lost their first two wickets with the score reading 11, with Stirling and Yates falling for 2 and 4. With wickets falling around him, Sam Hain scored 73 not out from 40 balls with 11 fours and a six. He was given support by Adam Hose who scored 20, and there were several lower order contributions to read 159 on the board.

Chasing 160 to win, Shan Masoon and Luis Reece put up 55 for the 1st wicket in 6.4 overs. Wayne Madsen walked in and started going after the bowlers right away, Masood and Madsen added 89 runs from nearly 10 overs. Masood was not out on 45 off 45 balls, while Madsen played the aggressive partner with 55 off 34 balls with 5 fours and 3 sixes. Derbyshire won the game by 7 wickets with 11 balls to go, the game though will be remembered for Braithwaite and his 5 penalty runs.