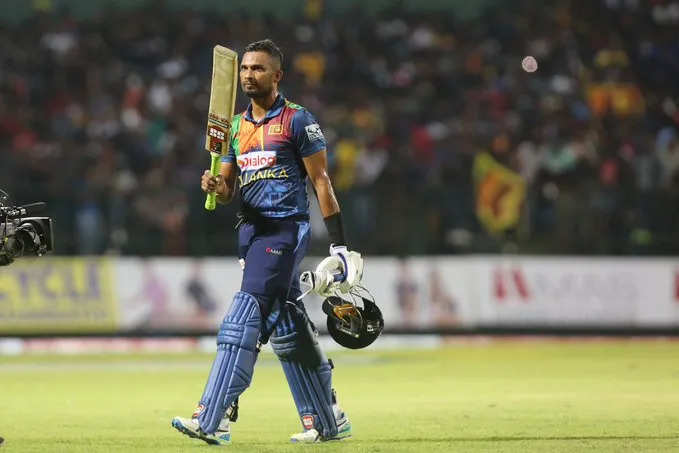 Revenge they say is a dish served best when its cold, and Sri Lanka made sure they gave a whole new meaning to it. Sri Lanka beat Bangladesh by 2 wickets with 3 balls in hand to make it to the super 4 stage. The game on Thursday was important for both the teams. Both Sri Lanka and Bangladesh had lost to Afghanistan making this game an eliminator. Sri Lankan lower order held their nerves as they scampered home to winj the game.

Chamika Karunaratne comes up with the best possible revenge –

Sri Lanka and Bangladesh do not see eye to eye on field of play in cricket. Bangladeshi players are mocked Sri Lanka by doing the Naagin dance in 2018. Once the winning runs were hit, Karunaratne who played a key role in the Lankans win with 2 key wickets and 16 runs started mocking the opposition. The Sri Lankan all rounder could be seen doing the same Naagin Dance to exact perfect revenge on Bangladesh.

Sri Lanka won the toss and chose to bowl first, the game was played on the same pitch was used a day prior for the India and Hong Kong game. Mehidy Hasan and Shabbir Ahmed opened the batting and added 19 runs for the 1st wicket. Ahmed became the first man to be dismissed when he fell to Ashitha Fernando for 5. Shakib and Mehidy added 39 quick runs for the 2nd wicket before Mehidy was bowled for 38 off 26 balls by Hasaranga.

Bangladesh suffered a bit of collapse when they found themselves at 87 for 4 with Karunaratne removing the dangerous Rahim for 4, while Shakib fell for 24 bowled by Theekshana. 39 by Afif Hossain and 27 Mahmudullah steadied the ship before Mosaddek Hossain scored 9 ball 24 to help Bangladesh reach 183.

Chasing 184 to win on a difficult pitch, the Sri Lankans had a task at hand to stay alive in the tournament. Nissanka and Mendis added 45 for the opening wicket in quick time as both the batters took toll of some wayward bowling. Ebadot Hossain, though struck twice in a over when he had Nissanka out for 20 and Asalanka for 1. Hossain struck one more blow when he had Gunathilaka out for 11, while Taskin Ahmed had the big wicket of Bhanuka Rajapaksa for 2.

Kusal Mendis was joined by captain Shanaka and the pair added 54 runs in quick time to bring SL back into the game. Mendis was out for 60 off 37 balls with 4 fours and 3 sixes falling to Mustafizur. Shanaka though kept at it going after the bowlers and scored 45 off 33 balls with 3 fours and 2 sixes. Ashitha Fernando turned hero with the bat as he hit 2 fours to help SL win the game by 2 wickets. Once the winning runs were hit, all hell broke loose and the SL players celebrated with vigor.