Watch! Chennai Crowd goes crazy for Sanju Samson as he makes his way out to bat 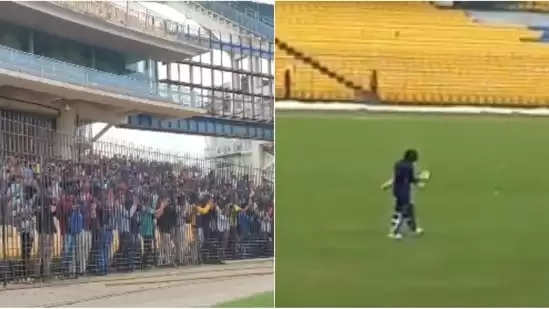 Sanju Samson over a period of last 6 months has emerged as a hugely popular cricketer amongst the Indian fans. The 27 year old was recently in the news for being overlooked by the Indian selectors for the T20 World Cup which is to be played in Australia. This created a chain reaction of anger and frustration towards the team management and the BCCI amongst the fans. There were reports that fans were going to hold a protest during the 3rd T20 between India and South Africa which is to be played at Kerala.

India A team is facing New Zealand A team in a 3 match List A games. Each of the games are supposed to be played at the Chepauk Stadium in Chennai. The first match of three was played on Thursday. Sanju Samson was named the captain of the side, which has some of Indian fringe players and ones trying to make a comeback to the Indian side.

Crowd cheers Sanju Samson as he walks onto bat –

Samson, walked into bat at the fall of Ruturaj Gaikwad’s wicket with the score reading 91 for 2. The India A captain was met with loud cheers as the small partisan crowd cheered his name. Once the 27 year old made his way to the ground, the crowd started to cheer and whistle in unison and there was pandemonium in the crowd, as chants of Sanju .. Sanju was heard.

Captain #SanjuSamson finishes the match with a SIX! India A beats New Zealand A by seven wickets in the first ODI.

What a mass entrance 🤩🔥

This was supposed to be a closed door affair –

Interestingly, this game was supposed to be a closed door affair, initially there was no crowd admission. The popularity of Sanju Samson is on such a rise that the fans paid no heed and made their way to the ground to cheer perhaps India’s hottest cricketing talent right now.

Shardul Thakur and Kuldeep Sen had the visitors on the ropes when they reduced the kiwis to 27 for 5. After a brief resistance, the Kiwis again found themselves on the ropes at 74 for 8. It was Rippon with 61 and 36 by Joe Walker which got them back into the game. Kuldeep Sen picked 3 for 30, while Thakur picked 4/32. Kuldeep Yadav picked 1 wicket for 22 runs.

Chasing 168 to win, Shaw scored quick 17 before becoming the 1st wicket. Gaikwad with 41 off 54 with 3 fours and 2 sixes, along with Rahul Tripathi with 31 off 40 balls then took the match away from the Kiwis . Samson scored 29 not out from 32 balls with a four and 3 sixes. Rajat Patidar top scored with 45 not out from 41 balls with 7 fours as India won the game by 7 wickets with 18.1 overs to spare.