Watch! Chetan Sakariya comes up with a special video for Ravindra Jadeja as the latter responds 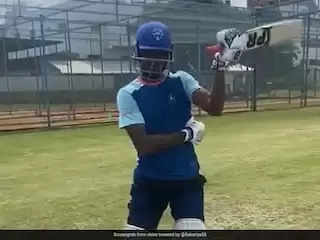 Indian cricket is days away from entering its busiest phases as they get ready to play back-to-back international cricket. Rohit Sharma and his men will be first playing against Australia and then host South Africa for a short series. The men in blue then embark for the 2022 World T20 which begins on October 16th. India kicks off their campaign with the big game against Pakistan on 23rd October at the MCG.

One Indian player who will not be part of the World T20 is star all rounder Ravindra Jadeja. The 33-year-old had injured himself in a freak accident post the first Asia Cup game against Pakistan. Jadeja’s injury to his knee meant that he missed the rest of the tournament. Jadeja under went a surgery and is now undergoing rehab for the same, which has saw him miss out on a spot in the team for the World Cup.

Chetan Sakariya comes up with a special video for Jadeja –

Ravindra Jadeja is posting pictures of himself as he faces the long road to getting back to fitness. His Saurashtra team mate Chetan Sakariya though, has put a small video to cheer up the Indian all-rounder. Sakariya took to twitter to post a short 6 second video of him doing the sword celebration.

Jadeja responds to the video by Sakariya –

Delhi Capitals pacer Sakariya, while posting the video wrote “in case you are missing Jaddubhai. Here’s wishing him a speedy recovery”. The video got over 16 thousand likes and 42 replies. Perhaps the most important reply was from the man himself. Jadeja seemed to have a smile on his face when he replied “Haha well done”.

2022 has been a testing year for Ravindra Jadeja, the year began with an injury where he missed a few games for India. He was then given the CSK captaincy and after a run of bad results, he was replaced by MS Dhoni once again. Jadeja had a public falling out with CSK and his future with the men in yellow seems to be on the rocks.

The latest injury too has had the all rounder in the hot water with the BCCI. It has been learnt that the BCCI isn’t too happy with Jadeja post the injury. The entire injury occurred when the Indian went for Jet Ski and Jadeja couldn’t control the Ski and injured himself in the process.