Watch! Comedy of errors take place during the 2nd ODI between Australia and New Zealand 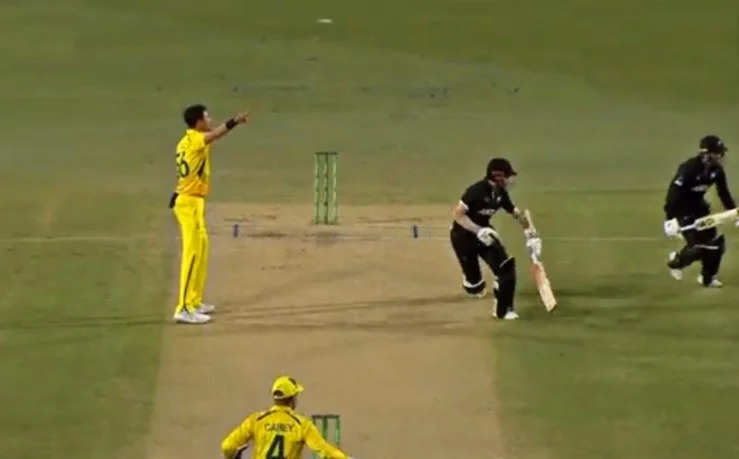 Australia on Thursday wrapped the short 3 match series win a win during the 2nd ODI at Cairns. Australia won the game by massive 113 runs while defending a mere 196 run target. The current T20 world champion side will now travel to India for a quick 3 match T20 series which begins on the 20th of September. The match on Thursday was filled with drama as both the sides found batting difficult and the bowlers had a brilliant day out on a pitch where run scoring was tough.

Chasing 196 to win, New Zealand had lost opener Guptill early yet again, and this got captain Williamson to the crease. Starc bowling to Williamson saw the kiwi skipper play the ball to the off side and look for a quick single. The Australian fielder came swooping in only to fail to pick up the ball. Williamson had already made his way to the non strikers end only to see Conway still stand. Conway then made up his mind to run but Williamson was already on his way back to the strikers end. When the throw was finally made, Alex Carey missed the stumps.

New Zealand won the toss and chose to bowl first, and the decision paid off quickly. Matt Henry struck twice early when he first had the out of form of Finch for a duck, while getting rid of Warner for 5. Boult then struck twice when he first had Labuschagne LBW for 5 and followed it up with a wicket of Stoinis for a duck to leave the home side reeling at 26 for 4.

Steve Smith and Alex Carey added 28 runs for the 5th wicket before Carey was dismissed by Santner. Maxwell and Smith then added 49 runs as both were very resolute and circumspect in their approach. Maxwell was out for 25 and soon Sean Abbott was out for 7. When Smith fell for 61 off 94 balls, the Australians were 117 for 8, that’s when Starc and Zampa added 31 and later Starc and Hazlewood added unbeaten 47 runs. Starc was not out on 38 while Hazlewood scored 23 not out. Boult was the best bowler for the kiwis with 4/38, as Henry picked 3/33.

Zampa picks as NZ are bundled out for 82 –

Kane Williamson with 17 off 58 ball was the top scorer for the twice world cup runners as none of the batters stood up. Santner with 16, followed by Bracewell with 12 and Mitchell with 10 were the players who got to double figures. Adam Zampa was the destroyer with the ball as he picked 5/35 from his 9 overs, while Starc with 2/12 and Stonis with 1/14 were the other wicket takers. Sean Abbott bowled 5 overs and gave away just 1 run to pick 2 wickets and also bowled 4 maiden overs.