Watch! Commentators left amazed as Rohit Sharma treats himself on the field 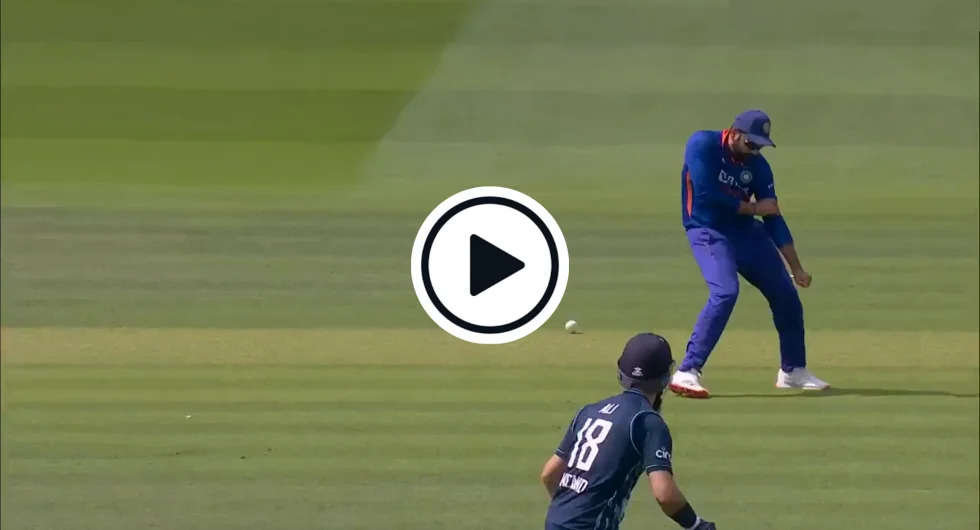 It was a complete demolition job by England as they humbled the Indian team by massive 100 runs. This win meant that the series has now gone down the wire with the score line being tied at 1-1. Recee Topley had done what Bumrah did in the 1st game and picked 6 wickets to break the back of the Indian batting unit. The series now moves to Manchester on Sunday in the day game that will decide the winners of the series.

Rohit Sharma “pops his shoulder” back into place –

The moment of the game happened during the English batting, Liam Livingstone was facing Chahal. Livingstone went for a hit over the off side and Rohit couldn’t get to it, but it looked like his elbow had come off. The Indian captain in front of the people “popped it back into place”. The commentators were shocked, Atherton said “Ouch, what has he done there? It looks like he just put his joint out there and put it back very quickly”.

Former England captain, Nasser Hussain felt sick to his stomach in what he witnessed on the field of play. The fellow commentators, Michael Atherton and recently retired Eoin Morgan saw the reaction of Hussain. The former English and Essex batter said “Eoin is at the back of the box. He says that he does that a lot, he dislocates his shoulder and he just pops it back in. is it elbow? Maybe elbow. Just pops it back in”. Atherton replied to it and said “Naseer just turned green”.

Rohit Sharma POPS his elbow back in and Nasser's just turned green! 🤢 pic.twitter.com/3px5xYHFPp

Chasing 247 to win, the Indian team were blown by the pace of the English bowling unit specially the tall left arm pacer Topley. Rohit Sharma was out for 0 as only 4 batters scored double figures as Hardik Pandya and Ravindra Jadeja both scored 29 to top score. Topley ended with 6 for 24 from 9.5 overs as India were bowled out for 146 to lose by 100 runs and level the series at 1-1. The series now moves to Manchester as the game will be played on Sunday.